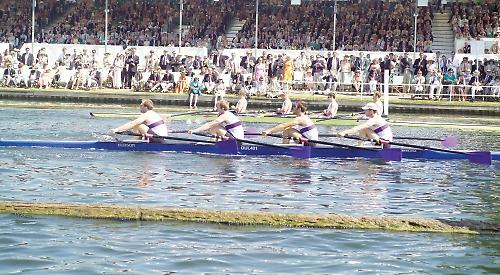 THIS year’s Henley Royal Regatta will see the third highest number of entries ever.

There have been 565 boats entered into the regatta, including 111 overseas crews.

Final qualifying for the event, which runs from Wednesday to Sunday next week, will take place today (Friday) with the draw tomorrow (Saturday) at the town hall at 3pm.

Five-time winner Mahe Drysdale will be looking to make to add to his titles in the Diamond Challenge Sculls.

He will face stiff competition from senior internationals Kjetil Borch and Nuno Mendes of Norway and Portugal respectively.

Great Britain and Leander Club’s Vicky Thornley will contest the Princess Royal Challenge Cup, with the field including Jeannine Gmelin from Switzerland.

They will contest the category against Leander Club’s Angus Groom and Jack Beaumont, who are among the 22 boats entered by the Great Britain squad.

The Silver Goblets and Nickalls’ Challenge will include Valent and Martin Sinkovic, from Croatia and gold medallists in the double sculls at the Rio Olympics in 2016.

Other heavyweight pairs will include national crews from Romania, Hungary, Australia and France.

Romania’s heavyweight men’s pair, who finished fourth in Belgrade, will also feature alongside crews from Hungary, Australia and France.

The Grand Challenge Cup is a three-boat entry with crews from Great Britain, Romania and Australia whilst the Remenham Challenge Cup will be contested by five different countries across 19 entries.

Three new women’s events have been added to the programme and the new trophies have been commissioned for this year’s regatta.

The Town Challenge Cup, for women’s coxless fours, will contain two British squad fours, an U23 crew from the USA and a composite from France and Australia whilst the Stonor Challenge Trophy, for women’s double sculls, welcomes entries from the University of Washington and Shanghai Jiao Tong, University of China.

Thames Rowing Club will look to make it three Thames Challenge Cups in four years. They will enter three crews as they look to retain their title.

NSR Oslo, from Norway, and Ruder-Gesellschaft Bonn e.v., from Germany, are expected to provide competition. The top contenders in the Temple Challenge Cup are Oxford Brookes, who has won three of the past four editions, and Amsterdamsche Studenten Roeivereeniging Nereus of the Netherlands, victors in 2015.

St Paul’s School will be favourites in the Princess Elizabeth Challenge Cup. The school will be looking to secure the “triple crown” after emphatic victories at the Schools’ Head of the River and the National Schools’ Regatta.

The Fawley Challenge Cup has attracted 64 entries and Sydney Rowing Club, who last won this event in 2011, could prove to be the strongest challengers as Maidenhead look to complete their own “triple crown” across the same three events.

On the women’s side Gloucester Rowing Club will not be making it a fifth title in a row in the Diamond Jubilee Challenge Cup as they haven’t entered a crew.