Strictly comes to the royal regatta 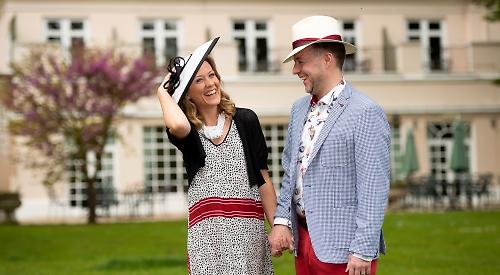 FROM their camera-ready smiles and confident poses, you’d be forgiven for thinking Gemma and Richard Miles were regulars on the catwalk.

Not a bit of it. The pair had never modelled before we asked them to step out in their finery for our annual look at regatta fashion.

“We jumped at the chance and had an absolute whale of a time,” said dance teacher Richard, 44, who can be seen here with his wife in some of the styles we can expect to see at this year’s Henley Royal Regatta, which begins on July 3.

The date of our photo-shoot did have a special significance for the pair as it took place almost two years to the day since they married at St Peter’s Church in Caversham.

Richard explained: “We got married in May 2017 and it brought back some poignant memories of being dressed up for our big day.”

Richard runs the Miles School of Dancing, which was started by his competitive dancer parents Joyce and Raymond in Reading in 1981 and is now based at Henley town hall, with children’s after-school classes at Valley Road Primary School.

Dancing since childhood and a professional dance teacher for more than 20 years, Richard first met Gemma when she turned up for lessons, originally with his father, almost 10 years ago.

“Gemma had been a rower and is very competitive,” he said. “She had done ballet in the past and always loved it and originally came along with some friends of hers.”

The friends might not have stayed the course but Gemma did — and they fell in love over their favourite dances, the waltz and the rumba.

So it was inevitable that the couple’s wedding dance at their reception two years ago at Shiplake Memorial Hall would have to be a showstopper.

Richard says: “We did a mash-up of foxtrot, samba, quickstep and jive to Morecambe & Wise’s Bring Me Sunshine. Then we did that trademark hands up their back routine followed by a lift before Gemma jumped into my arms in her wedding dress!”

They were still dancing on honeymoon in Borneo. Puzzled tourists found them on a beach rehearsing a waltz routine for an upcoming appearance at the Wargrave Festival on their return. They even rehearsed for the Henley Living Advent Calendar by dancing on ice during a trip to see the Northern Lights.

Now they offer their own wedding dance lessons at the town hall and Richard says several of his pupils have found love on the dance floor.

Baby Oscar’s arrival a year ago may have temporarily put paid to their dancing together but Richard says dancing as a hobby continues to go from strength to strength, thanks to the enduring appeal of Strictly Come Dancing.

“The dance industry wasn’t doing so well until the success of Strictly Come Dancing and had a bit of a stigma about it. Now it is going from strength to strength with a lot of people who enjoyed dancing when they were young coming back for lessons in their Forties.” The social life involved in learning to dance is part of the appeal, he says, and his pupils now share a WhatsApp group and there are regular social evenings with live music at the town hall, the next one on June 21.

Although Richard’s other children Harry,18, George,17, and 15-year-old Alice chose not to follow in their father’s footsteps, he is sure that one-year-old Oscar will do.

“I am confident that Oscar will become a dancer even though he can’t even walk yet!” he said.

Mum Gemma, 40, has been to the regatta at least 10 times but for Richard and newborn Oscar last year was their first visit as a family.

She said: “I keep coming to the regatta because the atmosphere is so great and for me, as a former rower, it’s a chance to catch up with old friends.

“I have a lot of old rowing friends who will come back to Henley for the regatta even though many have moved away.”

One of those she hopes to see is her former cox Peter Campbell, who is due to come all the way from Australia for the event.

Gemma can be seen wearing a selection of regatta hats and stylish dresses — all of them below the knee to comply with regatta dress rules — and all of them available from local retailers.

She said: “The regatta is always a great chance to stock up on new dresses and because the event is held over a week, we need to make sure we have enough clothes to keep us going.”

Gemma said the event also gave men the chance to make their clothes a top priority and her own husband was keen to get in on the act.

She said: “It’s absolutely part of the regatta that you walk up and down and see the boat club members in their finery and everybody has got a blazer.

“I think it’s definitely a place where men can have a bit more confidence to wear something other than their blue suit and let go a bit. Richard is desperate to wear a silly blazer and is really looking forward to it.”

Richard says he’s been used to dressing up as a lifelong dancer and has been thinking hard about what to wear this year.

Our pictures show him modelling a cream and blue striped linen jacket with blue cotton chino trousers and a dashing silk cravat.

“Knowing I would be at the regatta again this year made me go on the internet to try to find the most ridiculous striped jacket I could!” he said.

“I think the fashion adds to the occasion and is what makes Henley Royal Regatta. It is something quintessentially English. If everyone came in jeans and a T-shirt, would it be the same?”

So what did Richard wear for his first time at the regatta last year?

He said: “I was just in a shirt and shorts!”