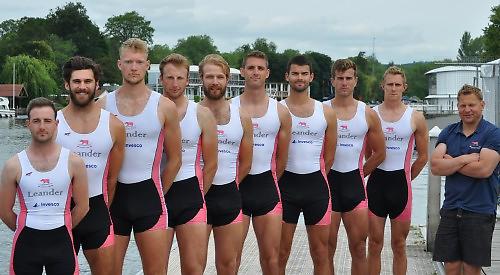 LEANDER Club, who have more than 80 athletes entered at this year’s event, are guaranteed to add to their impressive haul of more than 200 Henley Royal Regatta wins on finals day.

The Henley-based club is assured of medals in the Stewards’ Challenge Cup when Matthew Rossiter and Sholto Carnegie will be in the GB coxless four with Oliver Cook and Rory Gibbs of Oxford University against an all-Leander crew in a straight final on Sunday.

Also contesting a straight final will be the GB eight of Leander’s Tom Ford, Tom George, Jacob Dawson, Oliver Wyn-Griffith and cox Henry Fieldman with Oxford University’s James Rudkin, Mo Sbihi, Matthew Tarrant and Josh Bugajski who will be battle it out with the New Zealand national crew, who are entered as Waiariki Rowing Club, in the Grand Challenge Cup.

The Queen Mother Challenge Cup for quadruple sculls will be another straight final with the all Leander GB crew of bow Jack Beaumont, Angus Groom, Jonny Walton and stroke Pete Lambert up against the German national crew that are entered as Frankfurter Rudergesellschaft Germania 1869 e.V., Germany.

In the Double Sculls Challenge Cup, John Collins will pair up with Agecroft Rowing Club’s Graeme Thomas whilst Harry Leask will compete in the Diamond Challenge Sculls. In the Remenham Challenge Cup for women’s eights the GB crew will include six Leander Club rowers in Fiona Gammond, Josephine Wratten, Harriet Taylor, Rowan McKellar, Karen Bennett and Holly Norton. The Leander rowers will be joined by Imperial College London’s Zoe Lee and Rebecca Shorten with the cox for the event still to be confirmed.

Leander has just one athlete in the GB women’s quadruple sculls boat that will compete in the Princess Grace Challenge. Jessica Leyden will be in the bow seat along with Melissa Wilson, Mathilda Hodgkins-Bryne and Charlote Hodgkins-Byrne.

Additionally Leander have athletes racing in GB U23 development crews in preparation for their world championships as well as 42 club-based development squad athletes competing on home waters.

The junior squad will be racing two crews in The Fawley Challenge Cup for junior boys’ quad sculls.

Leander also has women’s entries in The Town Challenge Cup for fours, The Stoner Challenge Trophy for double sculls and The Princess Royal for women’s single sculls.