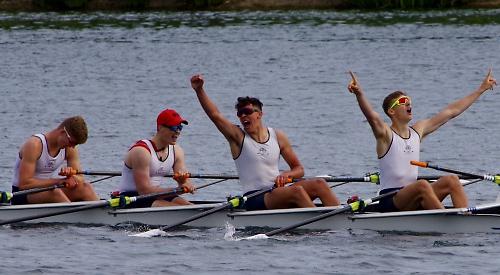 ON the back of a successful summer for both the junior boys’ and girls’ squads, Henley Rowing Club has seven crews entered for this year’s Henley Royal Regatta.

Three boys’ quads will be aiming to qualify for the Fawley Challenge Cup and four girls’ crews for the Diamond Jubilee Challenge Cup, the inaugural event in 2012 having been won by the club.

The Fawley Challenge Cup has attracted a large entry of 67 crews that will be whittled down to 24 after today’s (Friday) qualifying races.

Already this year Issa and Long have represented GB at the Munich Junior Regatta in May and all four boys have been invited to the GB Junior “Crew Formation” after Henley, from which crews are selected for the Junior World Championships and the Coupe de Jeunesse.

Henley’s second boys’ quad of James Swinburn, Euan Turnell, Grant Taylor and Luke Marshall won silver at the National Schools’ Regatta. Euan Turnell and Grant Taylor have GB vests having raced in a Henley quad in the J16 GB versus France match. Swinburn was a gold medallist at National Schools’ Regattas in successive years in J15 and J16 quads. The third quad of Sam Beattie, James Wallace, John Yolland and Oliver Taylor is the same crew that narrowly failed to qualify last year for the main regatta through the qualification time trial.

Older and stronger, they have high hopes of succeeding in qualification this year. Taylor represented GB as a J16 in the GB versus France match. The girls’ quad of Georgia Brown, Daisy Bellamy, Sophia Hahn and Hannah Hills are current National Schools’ champions. Hahn went to last year’s junior world championships as part of the American national squad while Bellamy represented GB at Coupe de Jeunesse. The club’s J16 girls’ quad of Holly Cookson, Della Luke, Izzy Cotten and Georgie Pollard will also be aiming to beat as many J18 quads as they can in order to qualify to compete in the event. This quad are the current National Schools’ champions for the J16 girls quad event.

The girls’ squad will have a further two quads entered, aiming to qualify for the regatta.

All seven crews will be aiming to be either selected or to progress via the qualifiers to the regatta and both the top girls’ and boys’ boats will be
aiming to make it to Sunday’s finals.