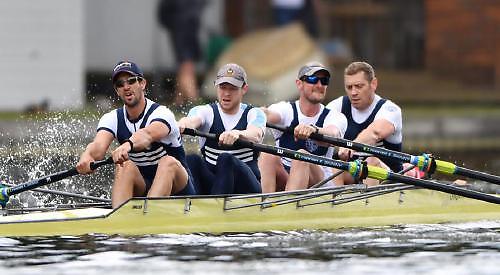 UPPER THAMES have entered 41 athletes for this year’s Henley Royal Regatta. This is the second highest entry ever from the club and a sign of growing enthusiasm for competitive aspiration.

The top ranked boat is the Thames Challenge Cup A crew, comprised of the bulk of this year’s senior squad who have been training hard under the guidance of Clive Cooper.

The eight won at Reading Amateur Regatta earlier this month in a coxed and coxless four and go into the Thames Cup hoping to make progress.

A coxed four is contesting the Britannia Challenge Cup, based on a crew of ex-Oxford Brookes University students who have been training around their work lives.

The Britannia is an event for 16 crews so the bar is likely to be a little higher for qualification than in the Thames or Wyfold Cups, the two other club standard events.

The Thames Challenge Cup B crew is stroked by Upper Thames captain Justin Sutherland, competing at the regatta for the first time in 20 years. He is joined by another previous winner, Jim Burkitt, and six more experienced crew-mates with an average age in their forties. This crew will have to go through the qualification process to make it into the main draw. The Wyfold Challenge Cup crew is similarly comprised of more experienced athletes who are talented on ergometer rowing machines and hoping to translate that ability into the boat.

They lost by just one foot at Reading Amateur Regatta and so have some decent form going into the regatta.

In the smaller boats, the club have a family-based quadruple scull entered in the Prince of Wales Challenge Cup. Mark Shimmin rows with his two sons Matt and Harry, with Harry having won the Fawley Challenge Cup in recent years. Their fourth man is surgeon Adam Rennie, a keen runner who regularly clocks sub 2 hours 25 minute marathon times.

In the single sculls events, Upper Thames have four entries, two men and two women. Luke Moneley and Liam Price will contest the qualifiers in the Diamond Challenge Sculls while Gillian Cooper and Amanda Hynes go into the Princess Royal Challenge Cup draw.

Finally, in the Double Sculls Challenge Cup, Tom Foster and James Scott team up. Foster won a bronze medal at the World Rowing Championships last summer while Scott is a previous Henley winner in both the Temple Challenge Cup and Ladies’ Challenge Plate. Ex-Upper Thames junior Johnny Jackson rounds off the expanded club regatta entry in a composite crew.