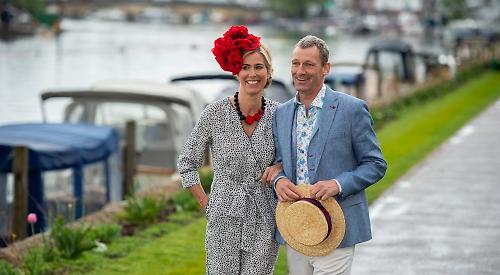 WHEN you live in Henley, the Royal Regatta is as much about meeting people and dressing up as it is about elite rowing.

That is according to Muffin Hurst and Justin Sutherland, who have been attending the event since they were children.

They say it is great to meet old friends or glimpse famous faces in the enclosures lining the river bank and take the opportunity to dress extravagantly in keeping with the atmosphere.

This is something that 52-year-old Muffin is perhaps more comfortable with, having run Henley Children’s Theatre for the past 30 years.

She lives in Hambleden but grew up in Henley and is the daughter of Mike Hurst, who was a member of Sixties pop stars The Springfields.

Muffin has been attending the regatta since she was 14 and always invites her girlfriends for a ladies’ day on the Thursday. As a member of the Stewards’ Enclosure, she enjoys the spectacle and pomp surrounding the event and being able so share it with friends.

She says: “We get as many to come along as we can. I think it’s a celebration of my home town. It’s a nice day for us to be together and we see so many of our older friends.

“I am unashamed to admit that I enjoy it more for the social occasion and I love the opportunity to dress up even though I am very much a jeans and a T-shirt girl. It’s part of the enjoyment. It’s like going to Ascot or dressing up for a wedding. Everyone likes to put their best foot forward.

“I also love the men’s clothes. I think the men can outdress the women on this occasion. I think the hats are wonderful and I love the old boys with their handlebar moustaches — they bring a smile to my face.”

Muffin, who has four children, believes the regatta is a main reason her town is so well known. She says: “I have travelled around the world and I am amazed how many people have heard of Henley-on-Thames. It is quite something for the town and it brings a lot of people. It’s a boost for business, restaurants and shops.

“You will get young people who will recognise 70-year-olds who are wearing the same school colours and ties.

“It’s a little bit old-fasioned in that sense and it does sound elitist but I’m talking about the Stewards’ Enclosure – there’s more to the regatta; there’s room for all.”

In the years she has been going, the regatta has become more corporate and the hospitality tents have spread along the riverbank almost as far as the start.

Muffin says: “There’s room for all of it and you can take your pick of where you choose to spend it.

“Otherwise, very little has changed, except that it’s possibly become a little bit more crowded. Everything about the regatta is great. It’s so traditional but it’s great fun for all ages.”

The regatta has been a constant part of life for Justin. His parents founded Upper Thames Rowing Club in 1963 and he himself is now the club captain and he has a regatta winner’s medal.

His father, Peter, also coached the GB team at the 1960 Rome Olympics.

Justin, 52, has known Muffin since they were together at Rupert House School in Henley.He is marred with three children and lives by Henley Bridge.

He admires the fashion on show at the regatta but is not a follower himself.

He says: “I am all for it but have never had the guts myself. I do not normally wear brightly coloured clothes.

“I normally watch the rowing in my shorts and a T-shirt from Upper Thames because I am so familiar with it.

“I think the women like dressing up. It’s like an Edwardian tea party and will always have a traditional slant to it.

“People enjoy it and there’s nothing wrong with people prancing around being seen. I think you will find most rowers are not averse to showing off a bit. There have been some ridiculous outfits over the years.

“There was also one year in the late Eighties when it rained constantly and people were just falling in the mud. It became like some sort of Glastonbury on the banks of the Thames.”

After modelling for the Henley Standard with clothes from  Laurence Menswear in Duke Street, he is tempted to make more of an effort dress-wise this year.

Justin says: “I think I should present myself slightly better than in jeans and a T-shirt. I would definitely consider going to Laurence and asking him for advice.”

Of course, for him, the regatta is still principally about rowing.

Having grown up next to the river, he wanted to compete in the regatta from an early age and in 1998 he won Wyfold Challenge Cup for coxless fours.

Years ago, his family hosted well-known rowers during the event, including members of the Soviet rowing teams in Sixties and Seventies, Daniel Topolski and Sir Steve Redgrave, now the regatta chairman.

Justins believes the regatta is still as popular as ever.

He says: “It has been going for 150 years and is a top class rowing event as well as a social one, which brings people and business to the town. That has to be a good thing.”