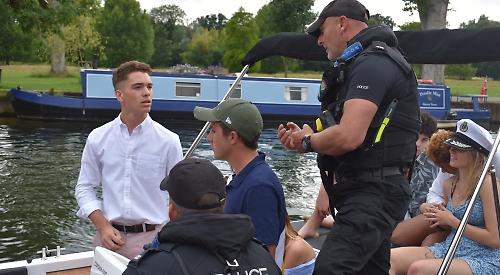 WHILE regatta revellers were enjoying themselves on Saturday night, they might not have noticed one particular boat sedately cruising along the Thames.

Sticking to the mandatory 5mph speed limit, the five-man crew had set off from regatta HQ next to Henley Bridge, waving at passers-by as they went.

What those watching may not have known, however, was what those men had on board.

No, not a bottle of the finest champagne but instead a pair of handcuffs, incapacity spray and a taser.

For this was a boat patrol full of police officers, doing their bit to keep Henley safe during one of its busiest and most boisterous nights of the year.

As thousands lined the towpath or took to pleasure boats — in various stages of inebriation — these guys were on duty and invited the Henley Standard to go along for the ride.

The full complement of police at work in town that night included a three-man bike patrol, search dogs and both armed and mounted officers.

Inspector Matthew Sulley, who took the Standard out on patrol, says that policing the legendary royal regatta is one of the biggest annual challenges his officers have to face.

“There are three reasons people end up in the water,” he says. “Either they are there voluntarily, or they have been pushed or have fallen in.

“The most common one is people falling in, perhaps because they have had a little too much to drink — and then hypothermia quickly becomes a risk.”

On cue, Insp Sulley receives a call from the Environment Agency about some young adults throwing bottles from a speeding boat.

Pulling up alongside, we find the boat — appropriately named Chuckles III — sitting low in the water with 15 sheepish people on board.

The officers suspect drink has been taken.

Crew member Sgt Matt Grandston speaks to the pilot and tells him the group have to take the boat home.

He explains: “We have given them a shot across the bows and warned them not to continue and do it again.

“They got really nervous when we got alongside the boat but actually it’s minimal stuff. We were all young once, weren’t we?”

Waterborne patrols are an important part of regatta policing, providing a valuable back up for the Environment Agency, and are meant to prevent breaches of the peace rather than save lives.

By now it is 7pm and time to join Insp Sulley and his colleague Insp Dave Washington on a foot patrol along the towpath.

We are warned that some regatta-goers are likely to have been drinking all day.

Insp Sulley said: “The vast majority of people at these events are good-natured but drunkenness is now an issue.

“You can see that if you were in a town centre on a weekend, you would not normally have this many people. Being drunk doesn’t mean someone is going to commit a crime, it just raises the risk.

“Generally speaking, people just act a bit silly really. The hardest part of our job is managing the risks and using officers in the most efficient and appropriate way.

“It’s about making sure people know we are there and can get to them if they are in trouble.”

This can be a long shift for his officers. Most of the riverside clubs are licensed until midnight and the police presence continues until the night-time economy closes. Officers get to go home at 3.30am.

But there are perks. Insp Washington goes so far as to say the force is lucky to have several big events like this to police during the height of the season.

“The regatta, Ascot, the Marlow Regatta and Reading Festival give us lots of opportunity to engage with the public,” he says.

“Our job is to show the public that if you are going to commit a crime, the police are about.

“Later on we get public order offences and drunkenness when people become so inebriated they can’t look after themselves.”

We walk to the start of the rowing course at Temple Island and pass Mahiki, the largest of the pop-up nightclubs.

“That’s quite a good sign,” says Insp Sulley. “That’s almost half as many as it could be, which means when they leave, we don’t have quite so many people competing for the same space.

“It is the biggest club and it’s very popular but the footpath outside is near the river and very narrow. We need to have a police presence here to keep people moving on the path.

“This area isn’t designed for this many people and you can imagine how difficult it would be to get down here in an emergency.”

As we continue along the towpath, the atmosphere becomes more relaxed. There are young families and groups of friends enjoying picnics on the riverbank and others dancing in several small enclosures.

Insp Sulley says it’s the diversity of the Henley crowd that helps the police to keep the peace.

He says: “We have a real cross-section of people attending, which actually helps.

“It means that people actually keep each other in check. When young children are about, most people will behave themselves, whereas if you go to a music festival you get only a certain type of person.”

Someone shouts at Insp Sulley but it’s only a remark about his distinctive yellow epaulettes.

“Do they mean you’re important?” inquires the joker — and there is laughter as Insp Washington shakes his head.

The banter continues as another reveller says: “I got dared to throw you in the river for £20.”

“Really?” responds the inspector. “You would lose that.”

Walking back towards Henley Bridge, the officers receive a call about minor assaults at Henley Cricket Club and another at Henley Rugby Club and officers are sent to investigate.

But the drunken man who approaches us next is in a good mood. He tells the officers that Henley is the poshest place he has ever been and that the regatta is an amazing event.

As we approach another enclosure, a group of friends ask the officers to pose for a picture.

A third policeman walking past joins in the fun and pretends to put handcuffs on one of the women.

The mood sours a little when we see the litter near the start line — lots of it, including wrappers, snacks, glasses and empty champagne bottles lining the towpath.

There’s a 20-minute break for a sandwich at the police HQ at Leander Club and by 9pm there are hundreds of people walking past us to get on to Henley Bridge to watch the fireworks.

Both armed and mounted officers are now monitoring the crowd.

Sgt Andy Hunt is armed with a 9mm Glock pistol and a LMT 556 Carbine rifle. He carries a taser, a distraction device and also wears a head camera.

A female passer-by is impressed.

“I’ve never seen police with guns before — that’s so sexy,” she says.

Sgt Hunt explains the armed officers are not at Henley because of any specific threat but rather to show the potential for a firearms response if anyone did try to launch an attack.

“We get quite a lot of people saying it’s a bit over the top but we explain to them that it’s not for drunk people and we would only use them in a very unlikely scenario if something warranted it.”

We see three officers on BMW bikes drive across Henley Bridge to help establish a road block at both ends. Police vans also park across both lanes to block access to the bridge so the crowds can watch the fireworks.

The display is spectacular.

The road is re-opened and hundreds have entered the Catherine Wheel pub in Hart Street while hundreds more queue outside in the rain.

They’re singing and dancing in the rain outside the Angel on the Bridge as street pastors hand out lollipops.

And the night shift for the police patrol — and the Henley Standard — will soon be over.

THE owners of a former pub in Hare Hatch have ... [more]