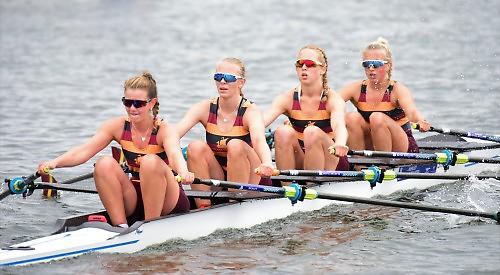 DAY three of Henley Royal Regatta sees Leander Club in 13 races out of a programme of 81 in total.

At 9.35am Leander Club won easily against Nottinghamshire County Rowing Association in the Town Challenge Cup.

At 10am Henley Rowing Club won in The Junior Women’s Eights against The Tideway Scullers’ School by a length and three quarters.

Ten minutes later Leander Club in a composite crew with Nottingham Rowing Club won against another composite crew comprising of athletes from Aberdeen University and Robert Gordon University in the Town Challenge Cup by a length and a quarter.

At 10.40am Leander Club took part in its third race of the day against University of St Andrews in the Prince of Wales Challenge Cup and won easily.

Five minutes later Shiplake College “B” lost in the Diamond Jubilee Challenge Cup against St Edward’s School who won by a length and a half.

Casey-Jane Green, in the bow seat, said the "whole race was really good" despite the loss.

She said: "We had a great well-controlled start and gave it 100 per cent. Overall, we are very happy and it was definitely improvement from yesterday’s performance.

"We were strong over the line and had a lot of support from everyone, which was really nice. We were excited for the opportunity to race at Henley but being the first girl’s quad from Shiplake, it was so much more than that.

"We have created a legacy for the school and for its girls because historically it had been dominated by the boys and it will hopefully inspire future girls to see that they can race at Henley as well.

"We were nervous going out to the start line but as soon as we took our first stroke we were in our element and went into it with all guns blazing.”

She and her crew mates will be staying in Henley for the remaining two days to cheer on the other Shiplake crews.

At 11.35am Leander Club also won easily in the Stonor Challenge Trophy against Nottingham Rowing Club.

At 11.50am the club won again in the Ladies’ Challenge Eight against Oxford Brookes University “C” by three lengths.

Ten minutes later the club had its seventh race of the day against a composite crew with athletes from the same club and Thames Rowing Club in the Visitors’ Challenge Cup and won by two and a half lengths.

At 12.05am Henley Rowing Club won against London Rowing Club “A” in the Thames Challenge Cup by a length and a quarter.

After the lunch break at 2.10pm Thames Rowing Club “A” won in the Wyfold Challenge Cup against The Tideway Scullers’ School “A” by two thirds of a length.

At 2.45pm Leander Club had its eighth race of the day against a composite team comprising of athletes from The Tideway Scullers’ School and Nottingham Rowing Club in the Double Sculls Challenge Cup.

Will Fletcher and Jack Burns lost by three lengths. Fletcher, 31, is a retired rower after he competed in the 2016 Rio Olympics but "wanted the experience of competing at Henley again".

He said: "It was a disappointment in many ways. We had a covid scare at one point during training which put us in isolation for a while.

"I came back for a laugh but it's been quite a difficult year because of covid. I'm towards the end of my career and just wanted to race at Henley once again while some of the other crews have more of a future.

"It would be nice to win at Henley again but I'm old so maybe it's my time to move on. But we pulled ourselves together and put in the best race that we could.

"Jack will be one to watch for the future and I suspect he'll be winning Henley medals in years to come and probably going to the Olympics."

Burns added: "I don't have many complaints. We just dealth with it the best we could but the others were faster."

Five minutes later the club had its ninth race in the Princess Royal Challenge Cup and won easily against Oxford Brookes University.

Ten minutes later another composite team comprising of athletes from Thames Rowing Club and London Rowing Club competed in the Ladies’ Challenge Cup against Oxford Brookes University “B”. They lost by two lengths and one third.

At 3.40pm Shiplake College “A” compete in the Diamond Jubilee Challenge Cup against Hartpury College.

At 4.05pm Thames Rowing Club “A” take on a composite team comprising of athletes from Frankfurter Germania in the Britannia Challenge Cup.

At 6pm Leander Club will race against Marlow Rowing Club in The Wargrave Challenge Cup.

At 6.35pm in the Fawley Challenge Cup is Henley Rowing Club against The Windsor Boys’ School “A”.

Leander Club take to the water again at 7.10pm against Hartpury University in the Princess Grace Challenge Cup.

Ten minutes later Thames Rowing Club “A” and “B” will compete against each other in The Wargrave Challenge Cup.

In the final race of the day at 7.30pm Leander Club will compete against The Windsor Boy’s School “B” in the Fawley Challenge Cup.