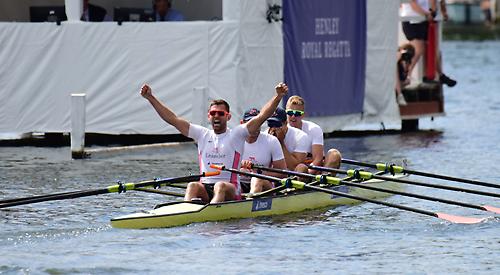 There was also a historic victory for the junior women's four from Shiplake College in the Diamond Jubilee Challenge Cup.

At 11.30am Leander Club athletes and GB Toyko silver medallists, Harry Leask, Tom Barras and Jack Beaumont, won the Queen Mother Challenge Cup against the University College, Cork and Skibbere by a length and a half.

The athletes claimed silver in the men’s quadruple sculls last month. Angus Groom did not compete and was instead replaced by Rory Harris.

The crew were met by family and friends who watched them jump them into the river after the win.

At 12pm Leander Club lost its second race in the Stonor Challenge Trophy against a composite team comprising of athletes University of London and Cambridge University by three quarters of a length.

At 12.50pm Leander Club won its fifth race against The Tideway Sculler’s School in the Hambleden Pairs Challenge Cup by three and a half lengths.

After lunch at 2.40pm Leander Club lost against Oxford Brookes University “A” for the Visitors’ Challenge Club by two and three quarter lengths.

At 3.10pm they won against Thames Rowing Club “A” for The Wargrave Challenge Cup.

Twenty minutes later the club won the Princess Grace Challenge Cup against a composite team comprising of athletes from Thames Rowing Club and Neptune Rowing Club, Ireland by a length and a half.

At 3.40pm Leander Club won against another composite team comprising of athletes from Twickenham Rowing Club and Queen's University in the Prince of Wales Challenge Cup by a length and a half.

At 4pm the club won its final race for the Remenham Challenge Cup against a composite team comprising of athletes from Oxford Brookes University and Queen's University, Belfast by one length and three quarters.

The presentation of prizes took place at 5pm at the Open Stand in the Stewards’ Enclosure. For the full story, see next week's Henley Standard. 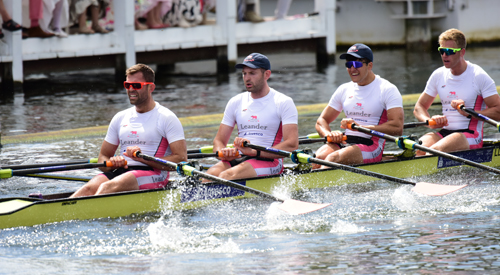