I’m thrilled to have won at Henley with school mates 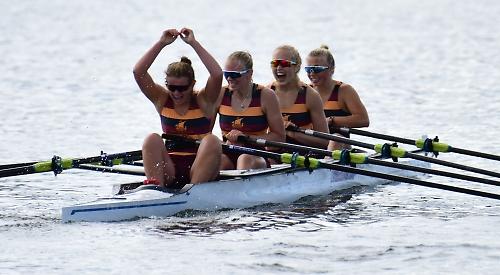 A TEENAGER from Wargrave has described winning at Henley Royal Regatta as “incredible”.

Mia Vickerman was part of Shiplake College’s junior women’s quad that won the Diamond Jubilee Challenge Cup to top off a season in which they remained unbeaten.

She and Nicole Dunn, Merry Oaks and Isabelle Blake-Hurworth beat Marlow Rowing Club in the final by two-and-three-quarter lengths in a time of seven minutes and 35 seconds. It was the first time the independent school had won a trohpy at Henley.

Mia, 17, said: “I feel pretty ecstatic, to be honest. I didn’t believe it at first, it felt like it didn’t happen but it did sink in after a couple of days.

Originally from Windsor, Mia has been sporty from a young age and particularly enjoyed playing netball.

She started rowing at Eton Excelsior RC when she was 13.

She said: “I had nothing to do and was a little bored and my mum insisted I should try rowing as it seemed fun.

“I remember the first time I got into a boat, it felt really weird and wobbly but I got it quite quickly.”

Mia and her family moved to Wargave three years ago. Her parents Brett and Anna run a window manufacturing and installation company in London and her sister Ella, 23, is a ballerina.

She joined Henley Rowing Club and tried every type of boat from a single scull to an eight.

But she likes the quad best, especiallya after she began rowing at the college, where she joined the sixth form a year ago.

“We are a very close group of girls,” said Mia. “It’s important to be close to your crew as you spend such long hours together. You have to work together until you become a full unit.

“With the training, there is just so much of it, you learn to love all the hard sessions and eventually it makes you a better rower.

“Racing is the most exciting part, when all the training pays off.”

Mia, who had attended the royal regatta twice before as a spectator, said she was nervous to compete at the event for the first time but was also confident.

“I didn’t know what to expect,” she said. “It’s so different when you are actually competing and not just watching.

“I was nervous but there was massive excitement — it’s Henley, the most important rowing event, and you are racing.

“We got into the boat and were quite nervous but were confident in our speed. We knew we had to work for it but that we had what it takes.

“When we came off the water after the final, my family was screaming with joy and said they were so proud that we had won. Our coach was waiting for us to celebrate and we had drinks for an hour and then we got ready for the evening and the prize-giving ceremony.

“I would love to compete next year too, it was incredible.”

Mia, who is studying for an
A-level in sociology and B-Tech business and criminology, is unclear about her future career but says she wants to continue rowing.

“I want to see where I can get as I go along,” she said. “I would love to row for Leander or Oxford Brookes University or Newcastle.

“Making the Olympic team is a dream for many people and it would be absolutely incredible to be able to do that in the future.”

Her father said: “It was an amazing achievement and we are immensely proud of what she has done.

“We wanted something for her to do at high level and she loved rowing from the beginning. She started in winter but she never complained about the cold or about the early starts. We thought, ‘She must really love it’.

“Representing your country internationally or at the Olympics is something so special that it would be amazing if she could get to that level but for now we are just over the moon that she is succeeding and can see the fruits of her hard work.”

One of Mia’s team-mates is also to have another year at Shiplake College — Merry, who is from Alsager in Cheshire.

Nicole, who is originally from Devon, is going to Princeton University in America where she will continue to row. She hopes to make the GB team for the 2024 Olympics in Paris.

Nicole said: “I’m so happy with the achievement and ready for what comes next.”

Izzy is to study mechanical engineering at Nottingham University and also continue rowing.

Dan Safdari, who coached the quad after joining the school in September, said: “The girls had gone unbeaten all year and managing that pressure for the regatta was really amazing.

“They did really well and the final was a fantastic race. It was crucial that they remained calm — the Marlow crew started off quite strongly but they could not keep up with our speed.

“I am really happy for the girls. Two of them are now off to university and I hope they will continue rowing to a high level. For the two girls that are continuing with me, they will keep training and there will be a reshuffle and a new crew.

“The motivation after succeeding at something like this is massive and it will be a valuable asset for the other girls that will be training with them.”

Mr Safdari, who raced at Henley five times in an eight and won the Thames Challenge Cup in 2009, said the school’s new boathouse and facilities had improved the whole squad.

He said: “It shows the school’s commitment to the programme. It’s a fantastic place to be and the students enjoy spending time there and the atmosphere is really good for them.”