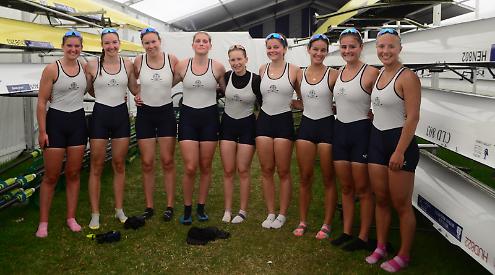 THERE were mixed fortunes for local crews on the first two days of Henley Royal Regatta.

Meanwhile, Shiplake College and Reading Blue Coat School in Sonning, took to the water in the student and junior events.

Their first race saw them beaten by Vesta Rowing Club in the Britannia Challenge Cup, for coxed fours, by three-and-a-half lengths in a time of seven minutes and 44 seconds.

Henley initially took a canvas lead, but this was overturned as the crews reached the half-mile mark with Vesta taking a one length lead.

Once Vesta got in front they continued to go further ahead and by the time the crews passed Remenham Club, they had moved into a three-and-a-half length lead.

At the grandstand, Henley had reduced the gap to three lengths but could not keep up with their opponents and fell further behind at the finish.

Henley’s Will Carey, 24, in the number three seat, said the race was always going to be a difficult one. He said: “Our plan was to stay with the crew as much as we could but they held out at a higher speed for longer and so, once in front, they were able to maintain the gap.

“We haven’t beaten Vesta before and this is the closest margin we have got to them so there are positives to take. We ran the race how we wanted to run it.”

Danske Studenters Roklub, Copenhagen, Denmark, beat a Henley Rowing Club and University of London composite crew “easily” in the Prince of Wales Challenge Cup, for intermediate quadruple sculls, in a time of seven minutes and 19 seconds.

Henley picked up a win against local rivals Marlow Rowing Club A in the Fawley Challenge Cup, for junior quadruple sculls, by three-quarters of a length in a time of seven minutes and 41 seconds.

Upper Thames won two and lost one of their heats.

Their first race saw them beat City of Oxford Rowing Club in the Britannia, by a third of a length in a time of seven minutes and 55 seconds.

At the quarter-mile mark both crews were level but at the barrier Oxford had a canvas lead, which they then extended to a third of a length.

Upper Thames came back and at the progress board both crews were level. At the finish Upper Thames had their noses in front.

Rob Leech, 31, who lives in Henley and was stroke of the Upper Thames boat, said: “We had a solid start and settled into a solid rhythm and absorbed the pushes that Oxford were making.

“We then made our move close to the finish and got in form. The roar from the Upper Thames supporters definitely gave us a hand and pushed us on but the moment we got ahead we started to become confident of getting the result we wanted.”

But the club suffered defeat in the Prince of Wales at the hands of the University of Surrey by two lengths in a time of eight minutes and five seconds.

Leander Club opened campaign in the Prince of Wales and beat Reading University B “easily” in a time of seven minutes and 15 seconds.

They beat Bedford School in the Princess Elizabeth Challenge Cup, for junior eights, by three-and-three-quarter lengths in a time of seven minutes and 31 seconds.

Shiplake raced into a three-quarter length lead early on and never looked in trouble, increasing the gap between the crews to five lengths at the mile marker.

The crew slowed down as it passed the grandstand but came away with a comfortable win.

Shiplake cox Wallace Fisher, 18, from Binfield Heath, said: “We went into the race confident. We were aware of our potential and just had to race our race.

“We had to go out hard, which was our race plan and by the time of the barrier we were well ahead.

“We believe we can go all the way this year. We are the fastest crew Shiplake have ever had.”

Sir William Borlase Grammar School beat Shiplake College in the Fawley by four-and-a-half lengths in a time of seven minutes and 59 seconds.

Shiplake pupil Fin Worthington, in the number three seat, said: “The race was all right. We just went out there and we achieved our goal, which was to compete at the royal. We are just going to enjoy the rest of the week and we will have another go next year.”

Shiplake College lost to the University of California, Irvine, USA, in the Temple Challenge Cup, for student eights, by two-and-a-half lengths in a time of seven minutes and 10 seconds.

On Wednesday there was further success for Leander, Upper Thames and Henley crews whilst disappointment for Shiplake College.

The day got off to a disappointing start for Shiplake College as they crashed out of the Prince Philip Challenge Trophy for junior women’s eights, losing by three-and-a-quarter length to Hinksey Sculling School.

Upper Thames Rowing Club beat Marlow Rowing Club by two-and-a-half lengths in the Wyfold having brought down their winning distance from four-and-a-half at the one and one eighth mile.

The crew were already a length and a half down at the quarter mile mark and three lengths down at the barrier as Thames reached the mark in two minutes and one second.

By the three-quarter mile mark the lead was comfortable for Thames as they lowered their strike rate down to 29.

Fawley was reached in three minutes and 27 seconds with Thames winning comfortably in seven minutes and 22 seconds.

Mark Lucani, number six, said: “I think it was an expected result. Thames are a really class crew. For us it was about getting to the regatta and enjoying the regatta as much as possible. I think four of the crew this was their first time racing at Henley so it’s a fantastic experience for them.

“A number of us are quite long in the tooth and have done this a number of times as well, so the chance to be at the regatta again is a very special thing.

“Our expectations were not necessarily to beat them but to participate in the event and have a blast, so job done and no regrets.”

Cox Bea Crossley added: “We just wanted a good finish and to finish as we would a normal race. So that’s what we did, pushed a little bit and finished on a high.”

The men’s four from Upper Thames were knocked out of the Britannia after losing to Thames Rowing Club.

At the end of the island, Thames had taken a half-length lead, which had extended to a length and a quarter by the quarter mile point.

Thames reached the barrier with a lead of three lengths in a time of three minutes and 30 seconds.

By the time the boats reached Remenham Club, Thames had taken a comfortable lead, which they maintained for the majority of the race.

Thames crossed the finish line three lengths ahead of Upper Thames in a time of two minutes and 42 seconds.

Rob Leech from the Upper Thames crew said they were proud of their effort. Mr Leech, who lives in Elizabeth Road, Henley, said: “We were up against the favourites, who have a really strong crew. They’ve got such strength and depth that they’re likely to go and win it.

“We had a good start and followed our race plan, but they were just a different level. We ended up recording our fastest time to the barrier, so there is a lot to be proud of.”

Henley Rowing Club beat Godolphin & Latymer School by three-and-a-half lengths in the Prince Philip Challenge Trophy. At the barrier, the crew was one length ahead and they continued to widen the gap until the end.

Ailish Harkin, of Greys Road in Henley, said: “We went out for a clean start and they gave us good race until the barrier. We kept a nice rhythm and we relaxed and lengthened out. I’m really happy with how it went. We’ll take it day by day — each race at a time.”

Leander Club beat Thames Rowing Club and University of California, Berkeley by two-and-a-half lengths in the Remenham Challenge for women’s eights. Leander also triumphed against Vesta Rowing Club in the Thames having reached their lead early on with three lengths at the barrier and four at Fawley.

Coach Jamie Axon from Caversham said: “They went out there hard for the first half and re-assessed from there. They did the race plan and I’m happy — they went out aggressively. Hopefully it will be the same every day, we’ll see.”