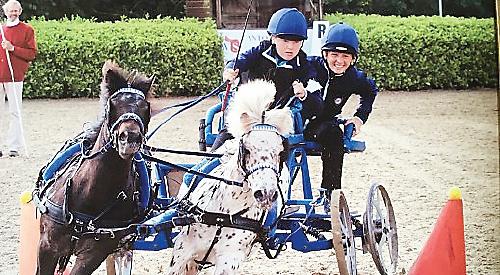 SCURRY racing will be taking centre stage in the main ring at this year’s Henley Show.

It is a fast-paced equestrian sport which involves a pair of ponies pulling a carriage around a course.

The aim is to achieve the fastest time without knocking any balls off the cones that mark the route. For every ball that is knocked off, the riders receive a time penalty.

The race is almost always done at a gallop and, due to the small distance between the cones (170cm), accuracy is key. A course contains between 10 and 14 obstacles, such as a box and slalom.

It is a spectator sport which the whole family can understand and enjoy and both men and women compete on equal terms.

The rules are very simple although the execution is extremely skilful. The cones are only 40cm wider than the front axle of the carriage so there is no room for error.

The twists and turns in the course cause the carriage to be unstable and therefore a groom is carried on the back seat and he or she swings from side to side to help to balance the vehicle and keep all four wheels on the ground. A groom leaning the wrong way could be catastrophic!

The full name of the sport is Double Harness Scurry Driving. It began in the Fifties in America using horses and four-wheel wagons that had to be negotiated around at barrels at speed.

It later came to England and a variety of turnouts was used but generally these were single ponies and the obstacles were red Watney’s beer barrels. The sport then progressed to using pairs of ponies and red cones. Drivers in general trotted through the cones, although some cantered.

The original vehicles had wooden wheels and solid tyres. Metal wheels came in about 15 years ago.

As drivers became braver and vehicles were adapted, the sport became faster and now competitors drive the course at speeds at which they can negotiate the course whether its trot, canter or gallop.