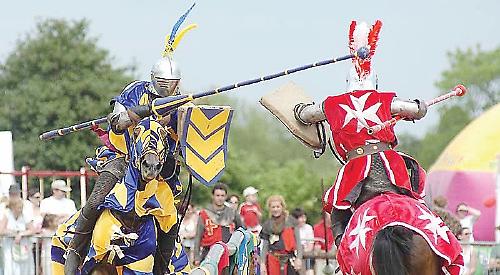 A JOUSTING display will be among new attractions at this year’s Henley Show next weekend.

The Knights of Middle England, a stunt team based at Warwick Castle, will perform battle recreations on horseback while wearing suits of armour.

They will also fight each other on foot with swords and axes.

A show spokeswoman says: “The Knights of Middle England are the leading jousting and stunt team in the UK and tour across the UK, Ireland and Europe at large venues, shows, castles, game and country fairs and prestigious horse shows while also partaking in filming and television work.

“They produce a very visual, fun-filled and action-packed show with fast horses and heroic knights performing stunts and hard-hitting contact jousting as they gallop towards their opponents to try to unseat them in the jousting arena.”

Another new attraction will be giant Aldabra tortoises from the Seychelles, which are tame and can be stroked.

The spokeswoman said: “The tortoises enjoy interaction with the public and are happy to be stroked and fussed. As they are placid creatures with lovely temperaments and great personalities, they don’t frighten visitors.”

The show will take place at the Henley Showground off Marlow Road, near Hambleden, next Saturday (September 8). Tickets are priced £15 (£10 seniors) or £10 (£7). For more information, visit www.thehenleyshow.co.uk