Bring on the knights of old 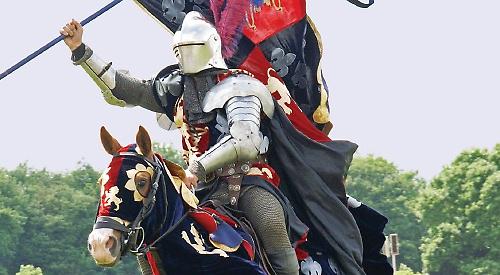 A JOUSTING display will be among new attractions at this year’s Henley Show.

The Knights of Middle England, a stunt team based at Warwick Castle, will perform battle recreations on horseback while wearing suits of armour. They will also fight each other on foot with swords and axes.

With more than 16 years of jousting experience in live shows and equestrian displays, the knights are a team of professional horsemen, jousters, stunt riders and actors who bring the much fabled sport of jousting full tilt into the 21st century! They perform at numerous shows, castles, game and country fairs and horse shows around the country. They also take part in filming and television work.

The knights on horseback produce a colourful, fun-filled and action-packed show as the armour-clad heroes perform stunts. They gallop towards their opponents and hit each other hard with their lances as they to try to unseat them in the jousting arena.

The knights usually have the names of fictional characters and historical heroes from previous centuries but for the Henley Show they have been renamed specially after some of the sponsors and will be going into combat as follows:

• Countess of Macclesfield versus the Phillimore Family