Show looks forward to the future of farming 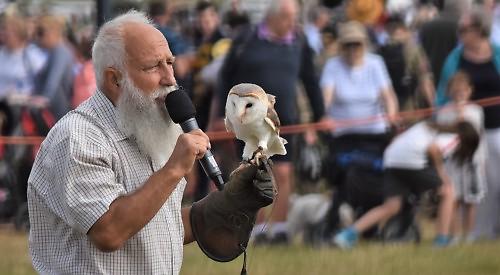 THE future of farming was the focus of this year’s Henley Farm and Country Show.

Thousands of spectators headed to the showground at Greenlands Farm, off Marlow Road, on Saturday.

The 129th annual event, which is organised by Henley & District Agricultural Association, returned after being cancelled last year due to the coronavirus pandemic.

Trophies were presented for livestock in a range of classes, including cattle, sheep and poultry.

Formerly known as the Henley Show, the association changed the name in 2019 to promote the agricultural aspect and attract younger audiences.

The next generation of cattle farmers had the opportunity to showcase their skills in the young handler classes.

The winners included nine-year-old Ellie Lucas, from Stoke Row, who took the young handlers section (aged six to 12) for the third year with her calf Sergeant.

She first competed at the show in 2018 with her family’s 120lb ram Crusader Beltex.

She had been training with Sergeant every day after school to learn how to lead him around the show ring.

Stockman Sam Horner, from Hutton Farm in Hambleden, said: “Ellie has been training so much to get to this level — young people like her are the next farmers and the next generation.

“We need the youngsters here as without them there’s no future for British farming.

“We have a new generation that doesn’t know where their food comes from — people are used to going to big supermarkets and buying meat from the shelves but they don’t think about the fact that it came from an animal that was loved and cared for.

“On top of that, the cost of food is rising constantly and farming is the hardest job in the world. Just to give you an example, I worked 51 out of 52 weekends this year — it’s a 24-7 job.

“Forget about holidays or weekends, the cattle need feeding and that comes first. If the animals are sick you stay up with them all night long. The stock is your priority and you dedicate your life to it, it’s as simple as that.

“We want to show the public that if they buy British, if they spend more and support British farmers, we will give them the best we can offer.”

The show also included displays of classic and vintage cars, horse-drawn carts and agricultural vehicles, many of which took part in a grand parade in the main arena.

Other attractions included a companion dog show as well as showjumping classes taking place throughout the day.

Children played with the giant tortoises on display and there was a sheep show set on the back of a 40ft stage trailer.

There was a children’s fun fair with a carousel, bungee trampolines, a helter-skelter, ferris wheel, swing boats, climbing walls, chairoplanes and a Punch and Judy show. There were also stalls run by local groups including the Henley Society and Greener Henley and exhibitions by artists including Sarah Pye.

The Henley Distillery in Binfield Heath and Honeys of Henley were selling their products.

Many of the exhibits were displayed in the open air rather than inside large marquees to reduce the risk of spreading covid. Retailers were also asked to bring their own gazebos.

There wasn’t a produce tent this year because growers didn’t have enough notice to prepare their entries.

She said: “We’ve seen lots of happy faces — the new format of the show seems to be working really well and we have received great comments from not only our members but also from the public. Everyone seems to have really enjoyed it.

“At past shows we had a lot of the traders in marquees rather than in the open air and people have been telling me this is much nicer.

“We asked people to wear masks in the enclosed areas of the show and we provided hand sanitiser stations in several spots throughout the ground.

“We were also expecting that the public would respect social distancing as covid is still with us.

“Having spoken to other show organisers, we knew some of them had record crowds this year so our expectations were really high and I think they have been truly met.

“The produce marquee has been missed but it will be back next year.

“The weather was perfect and seeing the smiling happy visitors, with everyone having fun after the horrible 18 months we have been through, has been the highlight for me.

“We would like to thank everyone for coming and we hope to see you next year.”

Clare Brown, whose parents used to farm in Rotherfield Greys, acted as the trophy secretary for the 11th year. She now lives in Suffolk but returns to Henley every year for the show.

Her great-great-grandfather Richard Ovey, of Badgemore, founded the association and the show, which dates back to 1891.

Ms Brown said: “It’s a lovely show and I’m really pleased we are back again after the pandemic.”

Jon and Laura Longridge, from Henley, were visiting with their daughters Beatrice, four, and Ella, two.

Mr Longridge said: “We came a couple of years ago and loved it. It’s nice to see it so busy this year.

“For us, it’s all about the carousel and the stalls. It’s nice to be able to show the kids real animals and to be really up close to them. It’s also good to see so many stalls run by local businesses — they had quite a hard year too.”

Helma Marlow, from Binfield Heath, who has been coming to the show for about 30 years, said: “It’s such a great day out.

“I’m a bit disappointed that they didn’t have the produce tent this year but that’s understandable as it’s still covid times.

“Walking around, taking in the atmosphere and bumping into lots of friends and people I know has been the best part of it.”

Ethan Procter, 11, from Henley, said: “The show has been great and it’s so nice to see everyone back. My favourite part was the birds of prey show, which I highly recommend to everyone coming to the show in 2022.”

The event closed with a series of parades, including one featuring animals from the livestock sections before the Corunna Band and Bugles of the Rifles Battalion of the Oxfordshire Army Cadets conducted the closing ceremony.

Alan Pontin, president of the association, said: “It was encouraging to see so many youngsters with their animals.

“I know some of them woke up at 5am to wash and groom their sheep. The show is really enlightening and encouraging in that sense.

“This year’s show was one of the most successful we have ever had and a number of people have said to me it was the best ever.

“It was a risk to take in financial terms but it was a good decision to go ahead with it and it has been justified by the number of people.

“I had a very enjoyable day and it was uplifting to see everyone enjoying it so much.

“We were really lucky with the weather and there was a good feeling about being outside after a long time.

“The success of the show is down to a fantastic team of people, largely volunteers, that were involved and had to pull the whole thing together effectively in a couple of months — they should be thanked for their hard work.”