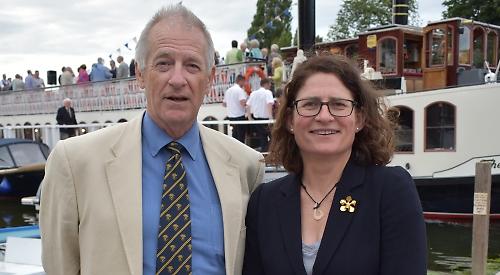 ALMOST 100 people enjoyed a trip along the River Thames for the annual Henley Town and Visitors’ Regatta president’s drinks party.

Olympic silver medallist Guin Batten, who was elected president in March, welcomed guests aboard The New Orleans on Friday evening.

Folk band Highly Strung, fronted by rowing coach Ian Desmond, performed for the guests as the Hobbs of Henley boat went to Marsh Lock, Wargrave and Shiplake before returning to its moorings. A raffle raised about £550 towards the regatta.

Miss Batten said: “It was an excellent evening and a good opportunity for the subscribers and friends of the regatta to feel part of the event. It’s the town regatta and has an amazing heritage. Members of the committee work very hard to keep that connection.”

This year’s regatta will be held on Saturday, August 4. Miss Batten, who won her medal in the quadruple sculls at the 2000 Games in Sydney, said: “I’m very excited about it. It’s after the racing season has finished and is much more laid back.”

The regatta developed from the Henley Rowing Club Boat Races, which started in the late 1850s. The name changed to Henley Town Regatta in 1887 and the word “Visitor” was added later to show the regatta had been opened to competitors from outside Henley.

See more pictures from the party in this week’s Henley Standard.