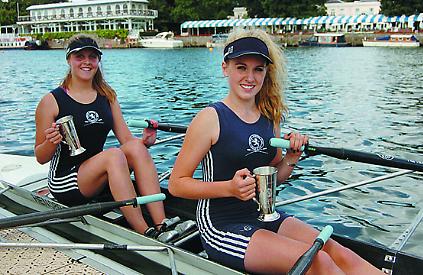 THIS years Henley Town and Visitors Regatta has once again attracted a record number of entries.

In all there will be 266 crews competing in 139 races on Saturday with more than 50 boats entered from Henley Rowing Club, Leander and Upper Thames.

The regatta enclosure is free for all to enter and families are welcomed. It will open before the first race at 8.40am with refreshments and a licensed bar available for spectators throughout the day until the last race at 7pm.

The entrance is a short walk from Henley town centre, just downstream from Henley Bridge.

Racing will be held on a three-lane course over 800 metres from Old Blades to Phyllis Court at four to five minute intervals throughout the day.

Entrants range from elite to primary, with the primary events offered especially for those who are new to the sport.

Once again, the regatta has also seen a large number of entries from junior competitors.

Spectators can take advantage of the opportunity to follow a race onboard an umpires launch by making a small donation to support the cost of running the regatta.

Mike Williams, regatta chairman, said: With such a large entry, we are looking forward to some fantastic racing.

As the only regatta on the Henley stretch to provide three-lane racing, there is always lots to watch and spectators are encouraged to come down to the enclosure and cheer on the crews.

Locals can support crews from Henley Rowing Club, Leander Club and Upper Thames and with more than 40 clubs from other towns and cities racing against them, there will be plenty of action to watch.

Thirteen entries have been received from Bled Rowing Club in Slovenia, celebrating the twinning between Bled and Henley established in April last year.

President of the regatta John Friend said: I was lucky enough to be part of the civic delegation that went to Bled to mark the twinning last year. They were extremely welcoming, and it will be a pleasure to be able to welcome them to Henley for the Town and Visitors Regatta.