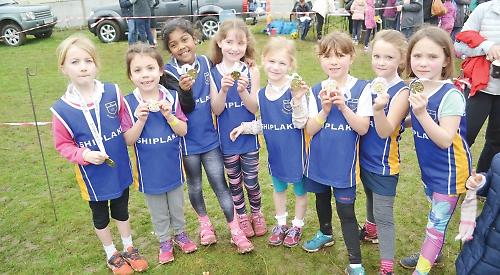 HORDES of children chased a stuntman around a cross-country course at the opening event of this year’s Henley Youth Festival.

Gary Connery acted as the “March hare” for the runners, who were all from local schools, at the Go Kids Run event at Swiss Farm on Saturday.

There were races for boys and girls in primary school years one to six and a total of 185 children took part, more than double last year’s total.

The warm-up was led by children’s entertainer Darren Hillier, known as Bertie Slippers.

Mr Connery, of Albert Road, Henley, set the pace for two of the races while the other hares included 11-year-olds Tom Le Beau and Arthur Unwin, both pupils at Moulsford School, and Georgina Ashby, 12, from Gillotts School.

There were team trophies and individual awards, which recognised enthusiasm and determination, and every child received a medal sponsored by Higgs Group, publisher of the Henley Standard.

Organiser Eileen Unwin said: “When we tell the children that it is the taking part that counts, we really mean it.

“The sense of camaraderie was evident and they were a joy to watch as they ran. Every single child gave it their all and for that we were so proud.”

The race results were as follows:

On Saturday night, the festival’s annual gig night was held at Lovibonds Brewery, off the Greys Road car park.

Six acoustic acts, five bands and a DJ took to the stage, all supported by a professional sound engineer.

Several performers were making their debut at the event, including James Grundy, 17, of St Andrew’s Road, Henley.

The Shiplake College pupil opened with two of his own songs, Ordinary Lives and You Make Me Happy, and two covers.

James, who has been playing guitar for five years, said: “It was a good atmosphere and a chance to perform to a different audience. I wasn’t too nervous, I stayed quite relaxed.

“A couple of people came up to me afterwards and said ‘well done’, which was nice. I’d like to play more pubs.”

Singer Daisy Willow Newman, 17, who is a student at The Henley College, performed five songs, which included two of her own, Cautious and Good Girls.

She has been singing for eight years but this was her first time at the gig night.

Daisy said: “I felt nervous before my set but once I got going my nerves disappeared and I felt amazing.”

She said: “It was a really nice crowd and everyone played really well.”

Henley College band Doubt it, comprising Archie Collins, Jonathan Hall and Finlay Burch, all 16, and Tom Pritchard, 17, closed out the night with cover versions of songs by Oasis and the Rolling Stones.

Drummer Finlay, who wore shiny gold shoes for the occasion, said the youth festival provided a good opportunity for young people to perform.

“It would be a lot harder to find somewhere to play without the gig night,” he said. Low Rising, which comprises Chris Tipper, 16, Euan Roell-Gibson, Amanda Barrows, both 17, Emily Hawkes and Toby Thackray, both 18, also performed.

The teenagers met at Reading College in September.

Dozens of spectators attended the event, gathering inside by the stage to watch the acts or sitting on benches outside with food and drink.

Many recorded the performances on their phones.

There was a licensed bar while Stovell’s Fish Suppers, run by Mike Rogers, of Lovell Close, Henley, served fish and chips from a van.

They performed their favourite pieces in front of an audience of family and friends.

During a series of mini-concerts throughout the day, there was a range of musical performers, including Brazilian drumming, string and wind groups and electric and acoustic guitars as well as singers and instrumental soloists, including a French horn. Lily Wildgoose, seven, from St Mary’s School in Henley, played Princess Waltz on the piano with support from her teacher Fi Harding.

Lily said: “I chose it because it’s a waltz and it goes up and down. Afterwards I felt really happy for myself — it was really good and I didn’t do any mistakes.”

Many of the children who took part belong to the Henley Music School, which is run by Laura Reineke.

She said: “We always look forward to the Henley Youth Festival and it never fails to delight us. The children come away with a real sense of achievement and confidence. I think it’s a brilliant thing. Thank you to all the wonderful volunteers and organisers.”

Kate Swinburne-Johnson, organiser and co-chairwoman of the festival, said it was “lovely” to see even more groups playing as well as the soloists.

She said: “The Badgemore Primary School choir joined the junior proms for the first time and their rendition of A Little Help From My Friends was a really uplifting end to one of our mini-concerts.”

The theme of this year’s festival is “journeys” and there has been a record number of entries to this year’s writing, art and film competitions.

The programme of workshops for local schools got off to a good start with sessions including screen printing at the River & Rowing Museum and performances of A Midsummer’s Night Dream by the Young Shakespeare Company.

Suzanne Yeates, a trustee of the festival, said: “The Henley Youth Festival is unique and everyone involved should be justly proud of what this week brings to the town and the amazing experience all those involved have.”

The festival, which is run by more than 60 volunteers and offers about 2,500 children the opportunity to take part in sporting and arts activities, is now one of the largest youth festivals in the UK.

Other events include Art in the Square, featuring children’s artist Dr Brian Squabbles and his Red Van in Market Place tomorrow (Saturday) from noon to 3pm.

Also tomorrow at the Kenton Theatre in New Street will be the festival’s Young Dancer event, for years one to four, from 1pm to 3pm and Dance, for years five to 13, from 7pm to 9.30pm.