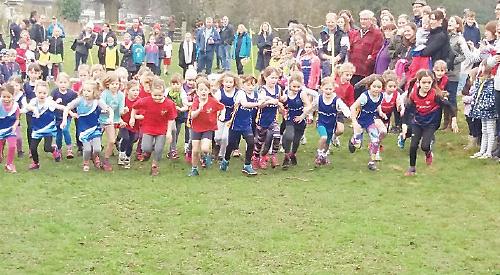 IT was a cloudy Saturday morning in March when many hopeful young runners braved the cold in order to compete in the Henley Youth Festival’s Go Kids Run at Swiss Farm.

At 8.30am many eager school-
children walked the wet and sloppy course that they would later tackle.

Mrs Rachel Salmons, deputy headteacher of Sonning Common Primary School, said: “We’re not here to win, however we shall give it a go. It’s a very hilly course but the kids will give it a go and have fun like they always do.”

After the walk the course was already heavily trodden and it became clear just how tough the run would be with slipping and sliding an inevitablity.

By 9am the car park had begun to fill up and the primary-age children started to pile up around the start line. It was a multi-coloured sea of smiling runners, proud parents and wishful teachers.

The red from Sacred Heart, Peppard and Kidmore End, the purple from Badgemore, the yellow from Valley Road and the blue from Shiplake, Sonning Common, St Mary’s, Rupert House, Nettlebed and Trinity all merged into each other like a mass wave of colour and joy.

After warming up thoroughly, the year one and two girls stood anxiously on the start line ready for the call to start. Then, as quick as a flash, the girls sped off from the line and began to run. After not too long, the winner emerged with sweat pouring down her face and steam heavily blowing out of her mouth.

Her father said: “I was incredibly proud when Jemima crossed the line. She has always been quite a good runner and came second last year. She represented her school wonderfully and it’s great to see her win.”

The year one and two boys’ race followed shortly after and was won by William Ely, of Sonning Common Primary School. Both Jemima and William had conquered the 0.64-mile long course with great determination and in fantastic spirit.

The tougher 0.88-mile long course for years three and four followed. The girls’ race was won by Evie Paton, of Peppard School, and the winner of the boys’ race was William Tavinor, of Valley Road School.

The year five and six children had to overcome a one-mile slog up three hills. The winner of the girls’ race was Charlotte Ashby, of Nettlebed. She said: “It was exhausting! It was a really tough course and I’m struggling to catch my breath.”

With one race left, the boys stepped up to the start line. For the last time the word “Go!” was shouted and the boys sped off.

After sliding and slipping all over the course, the winner looked like he had used up every ounce of his energy.

But Hal Rust-D’Eye, of Kidmore End, was elated with himself and his performance.

The presentation ceremony took place at 11.30am and all the children, parents and teachers stood around nervously waiting to hear the results.

Overall it was another well- organised event for the Henley Youth Festival and everyone looked like they had great fun.

Organiser Eileen Unwin said: “We always get a great turnout from all the schools and we always have fun and conduct the race in good spirit.”