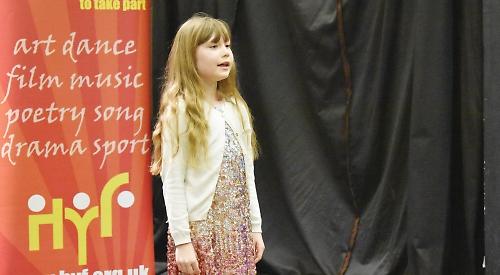 There were four concerts featuring 45 acts including singers, pianists and even a bassoon player.

They were watched by family and friends at the college’s Tithe Barn Theatre.

Each act was introduced by compere Alfie Hay, the festival’s performing arts co-ordinator and gala organiser. Many performed pieces of classical music but there were also renditions of pop songs and a version of the theme music from Pirates of the Caribbean.

Janey Mai said: “It’s the third time I’ve done it and I loved it. It was good fun. We put in lots of practice and it was very exciting.”

Maya Carter, nine, of Knappe Close, Henley, played the piano before returning to the stage to sing a cover of Rachel Platten’s Fight Song with no backing track. She said: “I was nervous but I enjoyed it. It was hard to sing without backing music but I think it sounded better. I’ve been playing piano for about a year. I’ve danced here before with my friend but this was the first time playing the piano and singing. I’d do it again.”

There were also performances by children from the Henley Music School, including its brass, cello, wind and violin ensembles. Many wore special T-shirts with the message “Keep Calm and Play On”. School founder Laura Reineke said: “The kids love it and it made a nice Mother’s Day treat. Everyone performed well, as they always do.”

Henley violin teacher Claudio Forcada, who runs Studio Forcada, brought several of his students to the event. He said: “Our first experience at the festival could not have been more positive, making the children feel comfortable and confident.”

The performers were watched by Richard Curran, musical director at the college, and Kate Billimore, who directs two choirs in Oxfordshire, who gave feedback at the end of the concerts.

Organiser Kate Swinburne-Johnson said: “Some young performers who hadn’t been learning for very long played for the first time and there were also some very polished performances from the older ones.

“Junior proms is all about encouraging our youngest performers to play in front of an audience and it is lovely to see some of them come back to perform year after year, clearly enjoying the experience.”