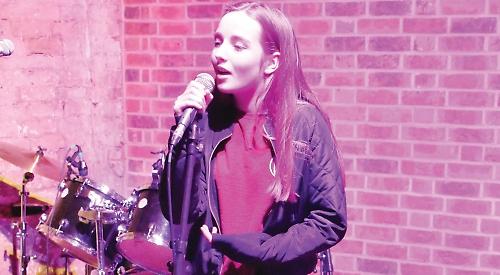 Nine acts, including singers, guitarists and a saxophonist, performed to an audience of dozens.

Daisy Lynch, from Middle Assendon, opened the show as she performed Piece by Piece by Kelly Clarkson.

The 12-year-old, who goes to Cranford House School in Moulsford, said: “I’ve always sung and I do it a lot at school. I get sort of nervous before I go on but not massively, it’s more excitement.

“This was really fun. There was a cool atmosphere and I really enjoyed performing. I’d definitely come back next year.”

Jodi Anderson, 14, from Sonning Common, played the piano and ukulele.

The Chiltern Edge School pupil performed Skinny Love by Birdy and three of her own songs, The World is my Therapy, One and Only and Born to Fly, which she wrote for a school performance of Peter Pan.

Jodi said: “I hadn’t done the youth festival before but had been advised to do as many open mic nights as I can. I loved it. Once you’re up there and start playing you get into the music and forget people are watching you. I’d like to do it again.”

The Shiplake College student, who plays the guitar and sings, performed four songs including Let It Go by James Bay and Waiting for You, which he wrote himself.

James said: “It was a really nice evening and the crowd was bigger than last year. It was nice to know what to expect this time.”

The 15-year-old, who goes to Reading Blue Coat School, said: “I have performed at the Kenton for the youth festival before but this is a more grown-up version. I wasn’t too nervous.” The audience danced to the music and cheered on the acts and many filmed the performers with their phones.

The night ended with performances by two bands, Dolly and the Dinosaur and Headspace.

Organiser Kerry Fretwell said: “It went really well and it’s nice that it’s bringing youngsters through because that’s what the festival is all about.

“It’s a nice place for people to cut their teeth. There’s a very relaxed and supportive atmosphere.”

• The fish and chip supper usually provided by Mike Rogers, of Stovell’s Fish Suppers, was cancelled after his van broke down on the way to the venue.