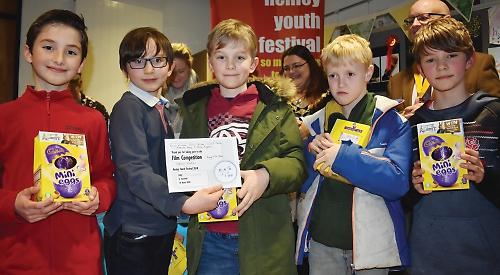 MORE than 50 children won prizes in the art and film competitions at this year’s Henley Youth Festival.

The best of the 200 entries were on display at the education centre at the River & Rowing Museum over the weekend.

The prizes were given out on Sunday by Mayor Kellie Hinton and Paul Harrison, president-elect of the Rotary Club of Henley Bridge, which donated them.

Each child was given an Easter egg and a certificate while a goodie bag was given to winners in the group categories.

Charlene Brown organised the competitions, which had the theme of “celebration”, the theme of this year’s 25th festival.

The art was judged by artist and teacher Josie Stewart, who said: “Every year there seem to be more and more high-quality entries. This year there was a lot of experimental use of different types of media.”

The film section was judged by film director Jo Southwell, from Aston, who said: “I was really, really impressed, particularly by the members of the Sacred Heart School Animation Club. There was a huge amount of variety and lots and lots of different ideas, which made it difficult to judge. It is brilliant that schools are teaching children how to use film as a way of expressing stories and being creative.”

Special Mention: What It Mans To Be A Scout by 1st Henley scouts.