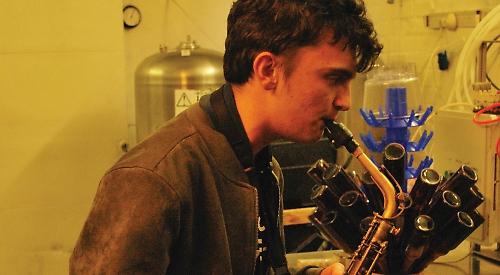 INSPIRING young performers took to the stage at Gig Night on Saturday, March 10, singing lots of their own songs and broadcasting Henley’s teenage talent.

The event, part of the Henley Youth Festival, took place at Lovibonds Brewery in Greys Road car park and featured nine acts: seven soloists and two bands. Daisy Lynch opened the evening by singing Piece by Piece with a lovely voice, followed by James Grundy, both of whom have performed at Gig Night before.

James, who is 18 and attends Shiplake College, sang and played guitar, starting with a song he wrote himself called Waiting for You.

For James, performing at Gig Night was special as it was a “good chance to get your name out there”.

Mia Agar and Sidni Brener, both 15, made their debuts. Mia, from Great Marlow School, sang Wings, a good choice of song to give an expressive performance.

She felt the night was a good opportunity for her, saying: “I don’t sing in many places.”

Sidni attends Reading Bluecoat School in Sonning and said he did not feel nervous about his performance on the saxophone, which he has been playing for four years.

Organiser Kerry Fretwell, who has been running Gig Night for three years, said there was a “supportive, positive atmosphere” that “makes teens feel grown up”.

This year’s event particularly stood out for her because it featured lots of original songs. However, her most memorable Gig Night was two years ago when the band Dolly and the Dinosaur played inside the fish and chip van that came along to the event.

Dolly and the Dinosaur were again one of the bands this year — their third appearance in as many years — but unfortunately without the fish and chips as there was a mechanical fault with the van.

The dance floor soon filled up for their performance and the band were very encouraging to their fans in the audience, getting them to dance and sing along.

One member of the audience, 14-year old Scarlett Jones, who has been before, found the event “inspiring”.

She said: “You get to find new music that’s not in the charts.”

The members of Dolly and the Dinosaur are aged 17 or 18 and attend either Sir William Borlase’s Grammar School in Marlow or The Henley College.

They are passionate about their music and the songs are very catchy — their singles are available on Spotify, the music-streaming service.

I very much enjoyed this opportunity to report on Gig Night. Maybe in the future I’ll join those musicians up there!