Children show competitive and kind-hearted side 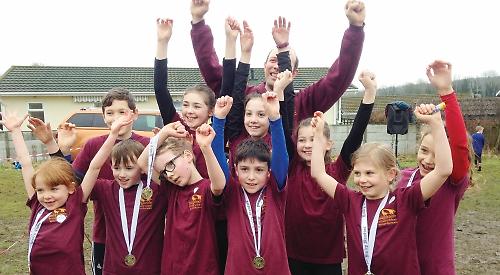 HENLEY Youth Festival’s 25th year kicked off on Saturday morning (March 10) with an amazing turnout of 141 children at the Go Kids! run.

The children were supported by an enthusiastic crowd of friends and relatives. Despite the slightly gloomy skies, a bit of drizzle and the muddy terrain they faced, the runners lined up with an optimistic attitude and huge smiles.

With races featuring all the primary school year groups, everyone had a chance to run on behalf of their school.

In a rainbow of different coloured team vests, the children’s sense of pride at representing their schools was lovely to see.

Before each race, the runners were treated to a fun and lively warm-up led by the energetic entertainer Bertie Slippers. Upbeat routines such as Funky Chicken added to the party mood!

When asked about how she was feeling before her year 1/2 race, Badgemore runner Zara said: “Really excited!”

She came fourth in the race that also saw Isabelle Lloyd kindly stop to help someone with their shoe, not worrying about where she was placed.

Sarah Roberts, PE co-ordinator at Nettlebed Community School, was pleased to see the success of pupils Isolde and Bridget, who came in first and third in the race.

“I’m proud of the girls, who love their running in school,” she said. “But everybody can run and enjoy it — it’s not just about getting on to the podium, it’s fitness for life!”

After a bit of a muddle at the start of the year 1/2 boys’ race, it played out very similarly to the first race with Joshua Martin coming home first for Shiplake primary.

The boys were definitely not fazed when they were asked to run again, allowing everybody their chance to take part — they all clearly had a fabulous time! Everyone gave their best, even if their legs were tired.

There was a sea of red vests around Gordon Reid as he finished the race accompanied by older members of his Sacred Heart team.

The resilience and wonderful energy of this group of young boys was clear to see.

Helen Boucher, year 2 teacher at Shiplake primary, said: “I’m majorly impressed by the attitude and determination of our year 1 and 2 runners.”

Ellie Horsley put in 100 per cent effort when competing with the boys after missing the girls’ race.

Jude Price ran on despite losing a shoe during his race. That would have been one dirty sock at the end!

From the foot of the last hill, there was a determined sprint to the line as Bronte Bennett and Gabriella Rust-D’Eye fought for first place at the end of the year 5/6 girls’ race. Pipped at the post, Bronte was still smiling and showed great sportsmanship as she received her medal.

The races concluded with strong performances from the year 5/6 boys who were joined by Kimberley, from Sonning Common primary, who held her own, having missed the girls’ race.

Lucas Wilson from Sacred Heart came in first but Nicolai from Badgemore was not far behind.

Real team spirit shone through as Nicolai sprinted back to join the rest of the Badgemore team who were running alongside their teammate Sebastian and they all finished together. Tim Hoskins, year 6 teacher at Badgemore, told his team how proud he was of how they had supported each other.

At the end of the event, there was a medal ceremony where the children were rewarded for their achievements and the schools found out where they were placed overall.

Eileen Unwin, founder of Go Kids!, took the opportunity to acknowledge the children who had been inspirational and really captured the spirit of this event and indeed the whole festival. Easter eggs were given to Gordon, Isabelle, Jude, Ellie, Bronte and Kimberley as well as the “hares” who had set the pace for each race.

All these special mentions showed just how kind-hearted the children of Henley really are and they represent the true values behind the Go Kids! run.

This year’s races will be remembered for the supportive and caring attitude of local children who made their parents and teachers really proud.

One final thought: I wonder if Jude ever found his shoe?