Mothers are proud as musicians and singers perform with distinction 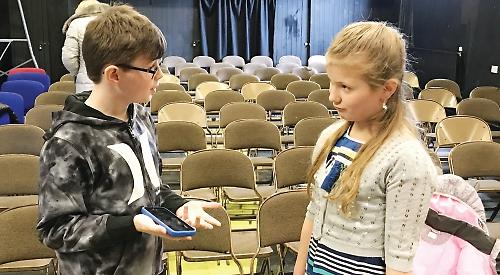 ON Sunday, March 11 it was the second day of the Henley Youth Festival, which is 25 years old this year.

The Junior Proms took place at Shiplake College. The first session started at 9am and the fourth ended just after midday.

The Proms were hosted by Alfie Hay, who is one of the founders of the festival and wore a bow tie for the occasion.

I was at the final session of the day, watching all the great performances by many talented children. The Henley Music School, which has more than 350 members, performed three times.

They started with Double Dazzle by Helen Butterworth which was a dazzle.

The second performance was of a piece by Mozart which was played by Janey Mai Manly on the piano. It was her third time at the Proms and it showed as she was excellent.

Maya Carter, nine, who goes to Valley Road Primary School, performed twice, first on the piano and later singing Fight Song. Maya wants to continue with music and pursue it as a career. She is also into street dance.

Xanthe Heriot, nine, who also goes to Valley Road, played Grand Celebration by Nancy and Randall Faber on the piano, which tied in with this year’s festival theme of “celebration”.

She has also played the clarinet and the ukulele and wants to continue with music.

The day was finished off by another Henley Music School performance, again with violins. They played Jazz Suite, which was a sweet way to end the show.

Kate Billimore, who gave feedback to the young musicians, told me that she looks for “confidence” and evidence that the children have worked hard to get to this stage.

Kate is a choir teacher and pianist who also plays the viola.

Alfie Hay said that 25 years ago, when the festival started, there was a Junior Proms but then it was called Music Makers. He said it was still about people showing what they could do in music.

I hope all the people who took part will stay in music and continue learning their instruments. It was a great day to be at. It would probably inspire kids to get into music as the performances were great and it really shows you are never too young to learn to sing or play an instrument.

This was also Mother’s Day and I think all the mums must have been really happy to see their children taking part.