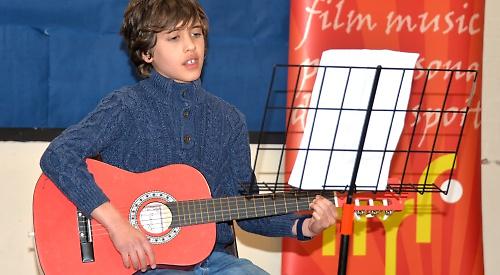 Forty-nine acts including solo and group singers as well as instrumentalists performed in the gymnasium at Rupert House School, watched by family and friends.

The children were introduced by musician Lucie Henwood and Peter Moody, a teacher at Trinity Primary School in Henley.

The programme varied from classical and traditional folk numbers to pop and rock songs, film themes and highlights from screen and stage musicals.

The school’s mini-choir sang a number called Creepy Crawlies and flutists Emma Galeta and Chloe Govett played an excerpt from Mozart’s The Magic Flute as a duet.

Billy and Rosie Elson, who are also students at the music school, played a piece called William’s Waltz on TooTs, a type of recorder that is held sideways like a flute.

Mrs Reineke said: “It was fantastic — the children did themselves proud and played beautifully with big smiles on their faces.

“The festival is an important part of our calendar because they love to play for such a friendly and supportive audience.”

The Valley Road Primary School choir sang (Somewhere) Over The Rainbow from The Wizard of Oz while the Henley Suzuki Violin Group played Allegro by Shinichi Suzuki and a piece called The Flower of the Quern.

Anna Del Nevo, of Blandy Road, Henley, who teaches the violin group, said: “I was very proud because it’s a scary thing to perform in front of strangers at such a young age.

“Some of the children were nervous beforehand but they did amazingly and came out buzzing with confidence.”

Solo performers included Reuben Cook, who played Henry Mancini’s Pink Panther theme on a mini-bassoon, and Isaac Urch, who played and sang Bob Dylan’s Blowing in the Wind on guitar, which he had only recently learned.

Oliver Duncan, who also plays euphonium and the guitar, drummed along to Gold Lion by the Yeah Yeah Yeahs and Ewan van Duijn played (Somewhere) Over the Rainbow on the saxophone. There were other performances on the cornet, piano, recorder, clarinet, trumpet and saxaphone,

The performers were watched by Rupert House’s head of music Jennie Breen and professional violinist Rebecca Allfree, who gave feedback.

Mrs Breen told them: “You have all shown lots of confidence and communicated really well with your accompanists and looked like you were having a great time.

“Keep going with it because you’re amazing and I’m sure we’ll see you again at the festival as you are all very talented.”

Miss Allfree added: “It takes a lot of courage to stand up and play in front of people and I could see some of you were scared but you were brave enough to do it anyway and it will become much easier in future.

“You’ve all put one heck of a lot of work in. There’s clearly a lot of talent in Henley and I’m very encouraged to see it.”

Mrs Henwood told the audience: “We’ve been blown away by the standard of music we’ve seen. Thank you so much for coming and supporting this fantastic venture.

“We’ve been involved with the festival for a long time and it never fails to warm our hearts to see everyone getting involved so enthusiastically.”