Friends come to boy’s rescue as he struggles in run 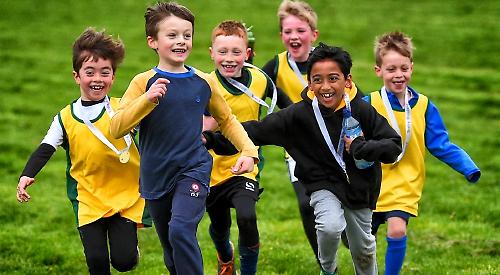 A BOY was helped to the finish line by his school friends during the Henley Youth Festival run on Saturday, writes David White.

William Hall, eight, who attends Valley Road Primary School in Henley, was struggling at the back during the years three and four race.

But his friends, who had already finished, ran back to accompany him the rest of the wayo the line.

William’s mother Katrin Hall, of Makins Road, Henley, said: “He wasn’t very well — he had a cough and a cold as well and was a bit out of breath.

“He was last and had stopped and thought he wasn’t going to finish. His friends ran back to him and cheered him up and they ran to the finish altogether.

“It was a beautiful thing to do and when I saw the picture I was so touched — it was so nice of them. He was really happy with what they had done.”

On Monday morning Mrs Hall and William bought sweets for his classmates as a thank-you.

She added: “I told him ‘this is a big deal’. It’s a beautiful example and lesson to others because when someone is struggling we should help — that’s the right thing to do.”

It was the second time her son had taken part in the event and her daughter Isabella, six, also took part.