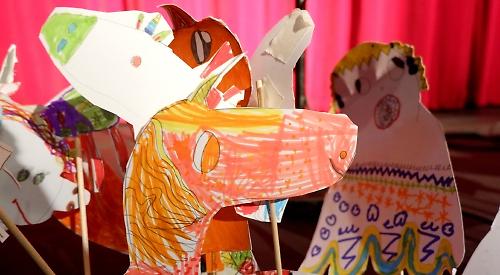 The event was held at the Kenton Theatre and featured
15 acts, including singers, gymnasts, dancers, drummers, a rock band and even someone performing a monologue.

The performers attend Henley primary schools or Gillotts and ranged in age from seven to 14.

“It’s a chance for young people who enjoy performing to experience a stage performance in front of an audience,” said Steph Maxwell, co-chair of the event. Entertain, which is sponsored by the Henley Business Partnership, is non-competitive with no winners.

However, special advisors Laura Lee, a professional singer and local singing teacher, and Muffin Hurst, who runs Henley Children’s Theatre, watch the show and provide private feedback to the performers.

Muffin Hurst said: “I had a great evening watching Entertain. It was full of great talent and such a wonderful variety. It’s marvellous to see so many children on stage and getting a kick out of performing.”

Joe Gater and Brian Jackson, both drama students at The Henley College, presented the show. They were both extremely funny and kept the audience entertained.

Opening the show was a workshop performance by the Young Shakespeare Company and pupils from Shiplake Primary School.

During a school workshop they had watched the YSC’s A Midsummer Night’s Dream and then prepared a response piece called Now Until the Break of Day.

This tied in perfectly with this year’s festival theme of “Dreams”.

There were also “Midsummer Night’s Dream”-themed artwork and props, including batiks that were hung over the stage, and puppets. These were made by children in workshops at various local schools, including St Mary’s, Bishopswood and Rupert House.

Many of the children were apprehensive before going on stage.

Beatrice Bertioli-Smith, who is in year 5 at Sacred Heart primary, said that she felt “a bit nervous”. Her mum Christina said: “Seeing your child on stage is nerve-wracking. You want them to do well.” However, Beatrice overcame her stage fright and performed a brilliant cover of Shallow by Lady Gaga. She said she chose this because “My mum loves the song and my friends love it.”

Best friends Astrid Waite and Heather Toward, both in year 4 at Peppard Primary School, did a gym and dance routine to Fight Song by Rachel Platten. It was their first time performing together.

The rock band, who called themselves HMS: The Lead, were one of the highlights of the show. They performed Something Just Like This by Coldplay complete with strobe lights and “smoke” machines.

George Weatherley-Bates, who plays keyboards, said: “I’m still a bit nervous even though I’ve been on stage before.”

The night ended with George Blumfield who performed a spectacular Stevie Wonder medley on the drums.

This year’s Entertain was very enjoyable and a great experience.

Muffin Hurst concluded: “All the children should be really proud of themselves.

“ I particularly loved the drumming, both boys and the monologue — tremendous talent! Well done to all.”