You’re never too young to play an instrument.. and here’s the proof 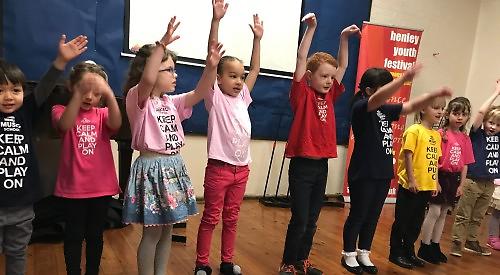 There were four acts, each lasting roughly an hour and consisting of lovely solos, duets or ensembles by primary school age children playing their instruments or singing.

The theme for the event was “Dreams”.

Using instruments such as the flute, clarinet, saxophone, trumpet and the trombone, the Windies managed to create a breathtaking cacophony of sound that kept you mesmerised.

The group performed the Harry Potter tune, which certainly fitted in with the theme. As well as being part of the wind band, 11-year-old Oisin also performed two solo pieces, one on the saxophone and one on the flute. He played exceptionally well, without any hesitation or mistakes.

After watching his performance, show compere Pete Moody said to Oisin: “I knew you were good but I didn’t know you were that good!”

I could not have put it into better words myself. Oisin was extraordinary and showed a lot of potential as a young musician.

It came as no shock to me to discover that he is good because he practices for 20 minutes every morning before school. If that isn’t dedication, I don’t know what is!

Oisin told me that what motivates him to keep practising daily is his passion for music and the satisfaction he recieves after perfecting a piece.

As well as his three performances at Junior Proms, Oisin also took part in Senior Proms.

The next group to perform were the Henley Music School mini choir.

They performed a piece called Creepy Crawlies, which certainly sent a chill down your spine! A line of the lyrics read, “I think spiders are great”. These children are obviously braver than me.

Another exceptional piece was performed by Daniel Wigfield, the first pianist of the evening.

He had been playing for only three months prior to the event and it was his first public performance. Even more impressively, Daniel had learned the whole piece off by heart and had not brought the sheet music.

Now on to the second session of the morning.

Asked why she decided to play the piano, Fleur replied that her father, Kevin, had made her do it but now she enjoyed it. She said she had been playing for two years and practised a lot at home. Fleur is doing her grade 4 very soon. I’m sure you will join me in wishing her good luck.

The saxophone proved to be a very popular instrument during the day.

Euan van Duijn played a particularly beautiful rendition of (Somewhere) Over the Rainbow by Harold Allen.

He said that before performances he gets rather nervous but once he’s playing he enjoys it.

The session concluded with a very graceful solo sung by Holly Maxwell. She recently took part in a musical called Aladdin and sang her song from that.

Holly had a sweet and pure voice and was a joy to watch and hear perform. There was not a second when she didn’t have a wide and enchanting smile across her face.

The lyrics read “An angel in paradise”, which seemed very fitting as Holly herself looked like an angel in a stunning white dress.

I was very privileged to get to see these young. ambitious musicians perform. The two comperes for the day were Mr Moody and Lucie Henwood, who both played music as children and have stuck with it over the years. Both have participated in a show together in front of an audience of more than 1500 people.

Age is not a factor in music as it is meant for all ages, so if you would like to participate in music then I would suggest you give it a go.

This event would not have happened if it weren’t for the Henley Youth Festival.

It costs £28,000 a year to run and that money comes mainly through fund-raising.

The festival gives many kids and teenagers opportunities to get involved in something that they would not have had otherwise.

I myself have very fond memories of singing in a choir, playing the ukulele, dancing and now reporting on it.

The festival is one of the things that makes Henley a fantastic place to live but without the volunteers giving their time to help and the sponsors giving funds, this wonderful event could not take place.

The festival now has a friend scheme at www.hyf.org.uk where you can give as little as £25 to help to keep this event running.