Inspiring performances by potential entertainers of the future 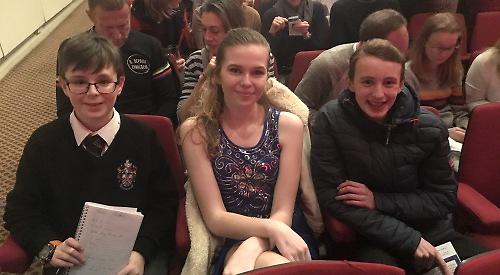 HENLEY’S got talent! And plenty of it, as demonstrated by the wide array of performances at Henley Youth Festival’s Entertain at the Kenton Theatre on Wednesday, March 13.

The opening act was a performance by Shiplake Primary School with the Young Shakespeare Company.

Then two presenters came on to introduce the next acts.

Brian and Joe are both 16 and studying for a performing arts BTEC at The Henley College and this was their first time presenting.

The next two acts were gymnastics, followed by Felix and Didi Richardson.

Didi has been playing the drums for more than two years.

Felix, who has been playing guitar and singing for three years, advises anyone getting into these instruments to “just keep practising”.

Act one ended dramatically with Oscar Scannell playing Skyfall on both drums and electric keyboard. Act two kicked off with a rock band featuring Felix Richardson and Oscar Scannell, from Henley Music School, playing Coldplay’s Something Just Like This.

Connor Botha, 12, acted out his a monologue adapted from Ernie’s Incredible Hallucinations.

Connor, who is a student at Gillotts School in Henley, loves drama and would like to be a movie director when he is older. He is helping to make a video about this year’s festival which will be available to see on YouTube. Connor was followed by dancers Eddie Pratt, 13, and Maddie Wakefield, 14. They started dancing as a hobby and have now been dancing together for two years. They are taught by Richard Miles.

Eddie thinks everyone should try it, saying: “Get into dancing. It’s great fun.”

The final singing performance was by 10-year-old Beatrice Bertioli-Smith who amazed the audience with a powerful rendition of Lady Gaga’s Shallow from A Star Is Born.

Beatrice, who goes to Sacred Heart Primary School in Henley, has been singing since she was two. She used to have lessons but now just sings herself. Her favourite singer is Olly Murs.

Beatrice gave an incredible performance — a star is truly born.

All the acts certainly inspired me and I bet they inspired other kids too.