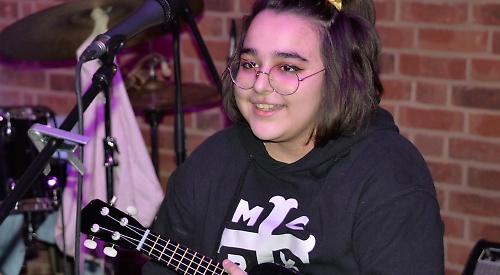 FROM Hallelujah to Hamilton, Taylor Swift to Queen... Henley Youth Festival’s Gig Night had it all!

Lovibonds Brewery hosted a jam-packed event for teenagers from the area, allowing them to perform their own songs and covers to an energised audience made up of their friends, family and fellow musicians.

The evening event took place on Saturday, March 10 and encouraged youngsters in school years 9 to 13 to show their musical talents.

The buzz and social atmosphere greeted a varied set of soloists and bands, who all took appearing on stage in their stride.

Emily Jin opened the show with a bang, singing a powerful solo as she accompanied herself on the piano.

She was followed by Trishna Venkatesh and Moksha Chittuluru, students at Kendrick School in Reading, both singing modern covers of Blank Space and Riptide respectively.

Neither girl had performed at Gig Night before but both seemed as if they had, receiving huge applause and support from their families. Soon afterwards, Luz Ruiz, from Gillotts School in Henley, shone with a memorable solo performance of singing and ukulele playing.

She felt the event was an inspiring place to see others perform as well as a great opportunity to showcase her music.

Shriya Srimushnam, also from Kendrick, had the audience transfixed with an emotional interpretation of Paper Hearts in her beautiful voice.

Blue Lights was then vocalised by 14-year-old Lynnette Osei.

For Lynnette, the gig was a great chance to perform to an audience, something she does regularly in church and at school.

Next to take the stage was Esha Dongare, who is 13 and also attends Kendrick School.

She played the acoustic guitar as she sang James Arthur’s Say You Won’t Let Go.

Esha said the event was “so lovely” and “everyone was so
welcoming”.

He had the audience engaged right from the first note and with his added humour and acting, they were applauding before he had finished!

Charlie’s performance undoubtedly made the audience feel involved in the story he was portraying, which he said later was what he tries to achieve when singing.

The positive atmosphere was reflected in Arya Kalavath’s performance as she sang an emotional cover of Hallelujah and then the well-known hit Feeling Good. She felt the latter song spoke for itself, saying, “It does make you feel good!”

Next to showcase her talent was another Kendrick student, Malika Malviya, who played a memorable edition of Queen’s Bohemian Rhapsody on the piano.

Charlotte Perry also made an appearance, performing two covers and her own song. Fisherman, which she wrote a couple of summers ago for a charity competition raising awareness of mental health issues.

Fisherman is only one of Charlotte’s many original works and she has recorded an album of her own songs, Chance To Say, which is available to download on SoundCloud.

Gig Night kicked off a week of exciting performing arts events in our town.

The positive feedback received from all who performed at Lovibonds showed that youngsters in the area should definitely “give it a go” and get involved in next year’s Henley Youth Festival activities.

We look forward to seeing you there!