Great show girls, but let’s have more boys like Charlie next year 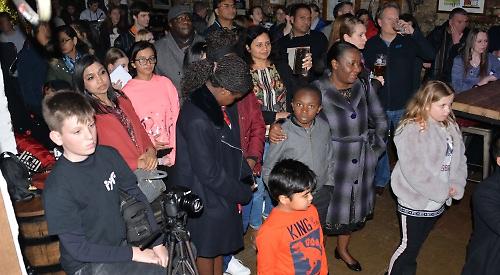 The event, which has been running for six years, was held at Lovibonds Brewery in Greys Road car park with family and friends flocking along to support the performers.

This year the evening featured 14 acts, with Emily Jin taking the stage first to perform her version of Dynasty.

Emily, who attends Kendrick School in Reading, gave an expressive performance on vocals and piano.

Luz Ruiz sang I Wish You Liked Girls, accompanying herself on the ukulele.

She chose the song because she felt it was “really important LGBT songs get a spotlight”.

There were multiple performances by female soloists, showing girl power was thriving just a day after International Women’s Day.

Audience member Natasha Clark Lam really enjoyed Gig Night, remarking that it was “a great way for the young people of Henley to broadcast their talent”.

Lynette, 14, was making her debut at the event and sang Blue Lights. She said she was very nervous but also determined to show her family what she was capable of.

For me, the stand-out performances of the night were by Arya, who sang Hallelujah followed by an incredible rendition of Feeling Good, and Charlie Thomas who performed two songs from musicals.

Charlie, who attends Shiplake College and is doing A-level music and drama, had the audience singing along.

He started with a performance of You’ll Be Back from Hamilton followed by a song from the musical Jesus Christ Superstar.

For Charlie, the best part of performing is “making the audience feel involved in the story”. This was his debut at the event and he absolutely nailed it.

Another Kendrick student, Charlotte Perry, who is 17, sang and played guitar. She performed two covers and one original song called Fisherman.

Charlotte wrote the song for a mental health competition and was inspired by what she and her friends were feeling. She has also written an album called Chance To Say, which is available on SoundCloud.

While it was great to see so many female musicians putting themselves in the spotlight, it would be fantastic to see more boys seize the opportunity next year.