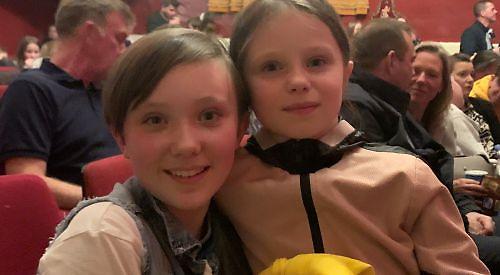 THE HYF Variety show was a great place for the performers to show off their skills, from violin playing to singing.

There were 16 amazing acts which performed at the Kenton Theatre on Saturday, March 14.

First up was Oscar Scannell who beat his drum to the sound of waves to create an emotional, fast-paced story which sent a powerful message to the eager audience.

His piece was called Oceans (the theme of this year’s festival).

The next act was by Joe Scott-Wood who performed a powerful piece which sent the audience crazy. It was Bohemian Rhapsody by Queen.

Next up was Sola Waves — Sophie Lawson and Ella Hanley — who gave an eye-catching and inspiring duet of How Far I’ll Go by Lin-Manuel Miranda. With some dancing and some singing, this was a dynamic duo.

Next we had the Demented Duck Duo, Tara and Georgia Chesters. They performed a funny and adorable duck song which was very much enjoyed by the audience.

Then it was the turn of Robyn Fielder, who sang Part of Your World by Howard Ashman and Alan Menken. This was a combination of great singing and a talent to get across a powerful story.

If you combine great gymnastics with emotional expression you get Yasmin Rigby, who sent the crowd into a frenzy with her precise and agile movements performing to Ocean Eyes by Billie Eilish.

Next we had Misha Yakovlev, who stunned the crowd with his amazing violin performance.

You could only watch as his hands moved flawlessly while playing Air Varie no 5 by Dancla.

Next was Rose-Anna Nicholson with her strong but calm singing of For Good by Stephen Schwartz, which could only lead to a great reaction from the crowd.

We watched fingers moving from chord to chord and drumsticks moving from drum to drum in Felix and Didi Richardson’s performance. They played Cold Hard Witch by Cester, Cester & Muncey. What chemistry!

After the break Felix and Oscar Scannell paired up to perform By The Way by the Red Hot Chili Peppers.

It was a great performance which included insane drumming and unique guitar playing. This was an immaculate performance.

Then we had Elodie Jones and Sophie Conde who performed Bruises by Lewis Capaldi.

This was outstanding with enchanting singing.

Next was Woody Hamilton Hurst who gave us a very confident performance of the upbeat Keep Your Head Up by Michael Christopher.

Woody really got the crowd going.

He was followed by Baby Bel — Isabella Stobie — with great poetry and a bright smile. She looked like she was enjoying herself and was at home on the stage as she read Caterpillars.

Then we had Tabitha Marriot who sang What’s My Name by Antonina Armato and Tim James and danced. She had a great outfit to top off her performance.

Tabitha received a lovely reaction from the crowd.

Next were the Maxwell Sisters, Lottie and Holly, who both showed what great voices they have as they sang All is Found by Kristen Anderson-Lopez.

They were so enthusiastic and clearly love performing. Talking to the performers at half-time, I spoke to Felix Richardson, who has been involved with the festival for three years in a row.

He thought that his performance had been a bit loud but went very well.

The Chester girls said they really wanted to perform the duck song.

They felt a bit embarrassed when everyone was laughing but enjoyed the experience
nonetheless.

Robyn Fielder said she had performed a couple of years ago but dropped out last year.

But this year she wanted to do it again and performed a capella.

Misha Yakovlev, who has been playing the violin for five years, told me that performing at the festival was fascinating.

He admitted to having been a bit nervous but said he enjoyed his performance.