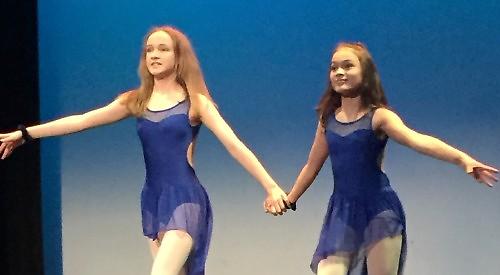 FLIPS, tricks, moves and grooves, the HYF Dance afternoon really had it all.

All 23 performers had their own unique acts ready for the audience at a packed Kenton Theatre.

You could tell how much work had gone into not only the dances but the organisation of the event.

Iona and Ciara did a great job as MCs.

We kicked off the show with a great opener from the Henley Berkshire Dance group with the song Genie in a Bottle.

“We were really excited and it was cool to be the opening act,” said Beatrice Bertioli-Smith, Niamh Quinn and Lucy Jean-Jean from the group.

The audience loved Katie and Freddy’s dance to Old Town Road, using props such as heelys and lassos.

Another crowd-pleaser was Ethan and Rupert’s funky Valley Road Hip Hop Duo, which got the audience clapping along.

Ethan made two appearances as his younger sister’s partner felt a bit shy, so big brother stepped in to save the day in the second act.

There were many brilliant girls’ duets, such as the Power Girls, Yazzabella and Suriya Knight and Lou Thimonier-Bayet’s dance. You could tell they were really loving it on stage.

Afterwards Suriya said: “I really enjoyed it and I didn’t want to stop because I was having so much fun.”

There were two very brave girls who performed solos — Sienna Cotton and Emilia Ziegler. Sienna said: “I was really scared but very excited when I performed.”

There was a very strong performance from eight girls from the Henley Berkshire Dance’s elite competition team.

Their act was an amazing hip hop and street dance routine with theatrical flair.

Soon after that, we were entertained by Rohan Shanker who was inspired by the film he really likes.

Spiderman into the Spiderverse was an intense, powerful dance and the costume really topped it off.

“I really enjoyed it but it was also really embarrassing when everyone sang ‘Happy Birthday’ to me as it was my birthday on Monday,” said Rohan.

Many people performing at the Kenton have appeared a few times now.

Amelie Holden said: “We have been doing the Henley Youth Festival for five years and I love it. It is so inspiring.

“I want to be a dancer when I am older so it’s nice to do it in front of loads of people.”

Amelie had just come off stage from dancing with her partner Mili Knight. They had performed a beautiful dance to Rooting for You by Alessia Cara.

Isabella Stobie and Yasmin Rigby said: “I think they should arrange for the HYF to be twice a year!” We had a great finale to the show with a group of 10 girls who all are best friends and love to dance.

Once the performances were over, Steph Maxwell, one of the specialist advisors said: “It was a brilliant show. We had real variety and I loved it.

“I really enjoyed the groups, especially the street dance group as they were very professional. The girls dancing in groups of three were also very good and well put together.”

Believe it or not, some of the performers were so excited that they are already thinking ahead to HYF next year. Roll on 2021!