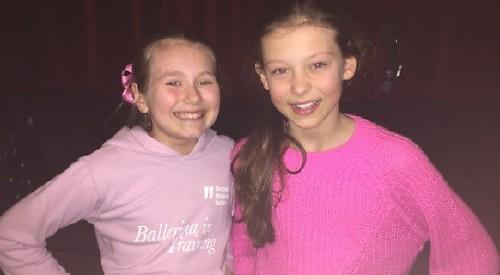 MORE than 70 children performed at this year’s Dance event of the Henley Youth Festival.

Held at the Kenton Theatre, the audience watched as dancers ranging from hip hop duos to lyrical groups entertained them with their routines, most of which had been choreographed by the children themselves.

It was the first time they had taken part as a group and they had rehearsed “quite a lot”.

Anaïs said: “I’m a bit scared because of the crowd. My sister did it and she did a really good dance and I want to copy her.”

Jess Moulds and Rose-anna Nicholson, both 10, performed as part of a group from Miller Dance Studio and danced to The Garden by Stealing Sheep.

“It’s about a lost girl in the woods and we’re evil pixies who capture her,” said Jess.

The pair, who rehearse weekly at The Henley College, had taken part in this event before but not as part of this group.

They said they were nervous but excited. The Valley Road Hip Hop Duo, comprising Rupert Haynes, 10, and Ethan Bentley, nine, have been good friends since they met at Valley Road Primary School.

They entertained the audience with a fun and lively hip hop routine that got them all going.

Performed to a medley of songs including Ocean by Khalid, This Is How We Do It by Montel Jordan and Jump On It by the Sugarhill Gang, the dance included some comedic elements as well as some impressive tricks.

Rupert said: “Ethan and our other best friend inspired me to dance. I was a bit nervous because it was my first time.”

Ethan, who did another duet with Tatty Campbell, said he was nervous but excited before performing and afterwards he felt “really amazing”. Rupert added: “It was really fun being on stage. When we were in our starting positions my heart was beating really fast.”

Another of the many duets performed was Ariana Nieduszynska and Frances Sadler, both eight.

This was their second time performing and they danced to Centuries by Fall Out Boy.

The girls, who “really like dancing”, included lots of gymnastics in their routine.

Before their performance, Ariana said: “I’m actually quite fine because I’ve done a lot of things like this before.”

Katie (dressed as a cowgirl) and Freddie (a horse) have known each other since they were babies and have become great friends. They danced together in last year’s Dance event and came back for more.

Katie said: “I was nervous mainly because of the audience.”

They used wheeled shoes to glide around the stage. Katie fell when gliding but quickly got up and the pair continued to delight the audience.

Juno Taylor and Holly Maxwell, both nine, performed to Stutter by Marianas Trench.

They have been friends since nursery and danced with high energy and big smiles, showing the audience plenty of gymnastics.

Holly said: “We do it every year. We both want to be dancers. It was scary but we got used to it through the dance.”

Melanie Woodward, of Berkshire and Henley Dance, who was one of three specialist advisors, said: “It was amazing. There was a good mix of ages. Everyone put their all into their performances.”

She said there was a strong connection between the performers and the audience.

Iona said: “I normally do performing but it was nice to be backstage this year.”

Ciara said that she loved being part of the youth festival and the dancers, adding: “All of them are different but all are talented.”

“It’s magical when it comes together. It gets better and better every year. It’s a good opportunity for the youth of Henley.”