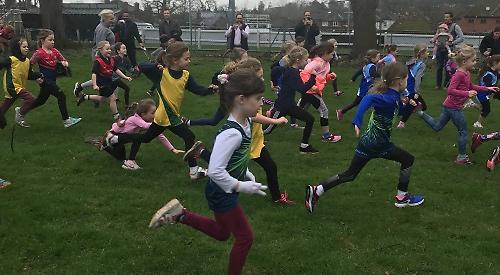 The event took place at Henley Rugby Club as part of the 27th annual festival.

With races featuring children from reception to year 11, everybody had a chance to run on behalf of their school.

The run was in partnership with Physiolistic, a physiotherapy clinic based in Henley.

Matthew Cox, of Physiolistic, said: “We have partnered with the Henley Youth Festival Run to try to encourage sporting activity and exercise, which is part of our role. Exercise is really important.”

There was a record number of participants: at least 230 children aged four to 16, who wore different coloured bibs sporting school names and logos. Crowds of people were there supporting the runners — parents, friends and even dogs, such as five-month-old long-legged Staffordshire bull terrier Otis, who was clearly very excited to see the races.

The reception 0.5km race started promptly at 9am and was won by Ava Macvarish, five, from Kidmore End Primary School.

Asked whether she would be running again next year, she said: “Yes, definitely!” The standard of running was exceptionally high, despite it being wet underfoot. The stamina of the young athletes was unbelievable.

The year 1/2 races were about 1km. Sonning Common primary excelled in the girls’ race, securing second and third places.

Deputy head Rachel Salmons said: “We have around 20 children from reception to year 6 taking part. I think we will definitely have a winner or two.”

She proved to be right as Sonning Common was placed on the podium a total of six times, including two firsts.

For every race, there was a pacemaker at the front and another adult runner, who brought up the rear.

The children nearer the back received a great amount of support from the spectators once they neared the finish line.

Runners made sure that they were well-stretched and warmed- up before their races. There was an array of different exercises, including lunges and squats.

Armin Majros and Joshua Drummond, year 3 students at Valley Road primary, were doing press-ups and were excited about participating.

After a cold start, the sun started to creep through just before the year 3/4 girls’ race.

Competitors in the year 5/6 races had to run a whopping 1.6km. Both the girls’ and boys’ race were won by Sonning Common, who clearly had been training extremely hard.

Trinity runner Eleanor Horsley said afterwards: “I think I ran really well, although the hills were quite tiring.”

After the junior results and prize-giving, the event concluded with races for years 7 and 8 and years 9, 10 and 11, both of which were over a distance of 2km.

Overall, the day was excellent and it was heartwarming to see the children’s optimism and sense of pride at representing their schools.

Everybody received a medal, which they all utterly deserved for the amount of effort they put in. The sportsmanship they showed was phenomenal too.

A cheque towards sporting equipment for the school with the most participants was awarded to Trinity primary (£250) and Gillotts School (£200).