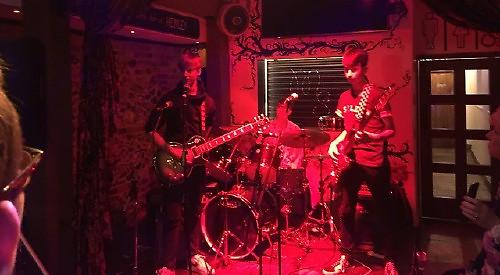 ON Saturday, March 7, multiple bands and soloists made up of young, ambitious musicians gathered at Magoos bar in Hart Street for Henley Youth Festival’s Gig Night.

Performances radiated infectious energy towards the audience. While there was surely some nervous feelings felt collectively by all the performers, the fresh, bustling and safe environment of Magoos allowed for apprehension to slowly decrease.

Mockbeggar, a band of three friends who share passion for rousing and upbeat music, particularly shone.

Mockbeggar performed three songs, including the original Take Me Away. Creativity was dense in this song, each note filled with undeniable energy and pure talent. Despite the band having been together for only nine months, this was not the first time they had performed in public, having played at locations such as Reading.

Their confidence was on full display, particularly by lead singer Tommy.

His decision to invite the audience to sing along and even dance not only engaged the crowd but also lifted the mood of the song to one of extreme happiness and vibrance. Mockbeggar hope to continue and eventually reach professional level.

Another awe-inspiring group to perform were The Wires, a collection of talented, prodigious friends from Gillotts School.

The band is made up of Felix Richardson and Joe Archibold (year 7, singing and guitar), Ela Chamberlain (year 8, drums) and Jess Robinson (year 7, bass).

They come together three times a week to practise their songs. This was their live debut, having only performed for their school a few months prior to Gig Night.

Their confidence was obvious throughout their set, despite their young age, and they were refreshing.

The musicians’ friendship was obvious during the entirety of their performance as they appeared to be having significant fun at all times while staying in sync.

Audience participation was invited as the lead singer asked the audience when he sung “From the Queen of England” to sing back “To the hounds of hell.” At this moment smiles lit up the room as everyone let loose and began to sway tentatively at first and gradually more noticeably.

A moment in time, where worries were momentarily forgotten and the entirety of the atmosphere was full to the brim with happiness and a cacophony of uplifting music.

All the bands and soloists displayed qualities of aspiring rock stars and lyricists. Each and every song was beautiful and unique and the level of sheer talent and emotion poured into every song was truly inspiring.

It was the emotion that was incorporated into every song that escalated the fun and significance of this event.