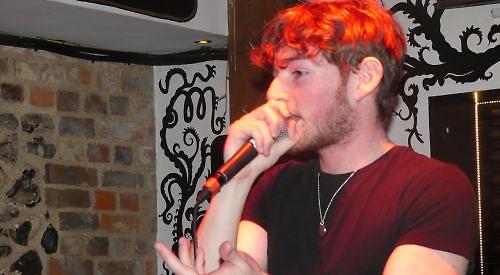 EVERYONE was chatting about Gig Night, the other Saturday night.

As soon as you entered the room, you could feel the tension, the excitement, the buzz.

The back of Magoos in Hart Street was packed with people anticipating an evening of fantastic music and outstanding talent.

They were not disappointed. Henley’s got talent — masses of it…

There were 10 acts covering heavy rock, pop, rap and punk and featuring artists aged 11 to 18 from in and around Henley. A number of bands and solo artists performed covers or their own songs during the evening.

Despite the band’s formation only nine months ago, they were extraordinary.

The band, who formed about a year ago, played spectacular renditions from The Clash and The Jam.

Julian’s performance on the saxophone for Madness’s One Step Beyond was incredible.

Their abilities to command the audience’s participation with “To the hounds of hell” were extremely impressive and very entertaining.

The Henley Music School Band, alias Lola Morrison, Oliver Harris, Luke Morgan and Zena Meachin (in year groups 9 and 10 at Gillotts School), only got together in recent months.

However, they gave it everything with their standout performance and were inspirational. Outstanding female solo vocalists of the night included Hannah Leach-Scrivens, 14, on keyboards, singing her own songs inspired by nature and from the heart.

She plans to record a CD of her own music this year. Brilliant!

Another outstanding vocalist was Josie Tyacke, 18, who played punk on her guitar.

She has been performing for 10 years and displayed a mixture of confidence and emotion with her songs.

The solo boys definitely brought their all.

In the mix was the extremely talented Milo Griffiths. The audience loved his performance and engagement. He has been recording music for four years and hopes to perform more often too.

Luke Morgan, 15, delighted the crowd with his amazing rendition of some Oasis songs on the guitar. This was astounding talent.

This certainly provided a great change of pace to the performances and a contemporary feel which was a huge hit with the supportive audience.

Gig Night at Magoos was a great success with a bunch of very talented teenagers. It really was a night of teen talent.