Star performers at the festival Variety show — by Scarlett Hyde 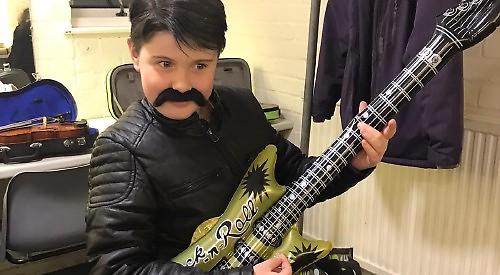 AS you probably know, the Henley Youth Festival team have been working their magic organising lots of amazing events.

A particularly special one was the Variety show which took place at the Kenton Theatre on Saturday, March 14.

There were so many amazing performances, from poetry reading to dancing.

One of the very first performers was Joe Scott-Wood, who is 11 and, like me, is in year 6 at Trinity Primary School in Henley.

He sang Bohemian Rhapsody by Queen while dressed as the legend himself, Freddie Mercury.

I spoke to Joe in the interval and he said he loves Queen and he knew the words to the song before deciding to perform it.

He believes he is a natural performer and I have to agree.

Another amazing act was Yasmin Rigby, who is eight and in year 4 at Trinity, performing two poems and an inspiring dance to Billie Eilish’s Ocean Eyes.

Yasmin said she really enjoyed the experience and that she loves gymnastics.

She also did the HYF fun run and performed at the HYF Dance event.

There were so many more performances, such as brother and sister duo Felix and Didi Richardson singing, drumming and playing the guitar. It was their third year performing at the festival.

I also spoke to Steph Maxwell, who organised the event.

She said that it was her fourth year organising Variety and that she was really pleased with all the work the performers had put in.

Her daughters Lottie (year 7 at Gillotts) and Holly (year 5 at Trinity) sang All is Found by Kristen Anderson-Lopez, which was really powerful. There were so many other great performances from Oscar Scannell, Sophie Lawson and Ella Hanley, Tara and Georgia Chesters, Robyn Fielder, Misha Yakovlev, Rose-anna Nicholson, Elodie Jones and Sophie Conde, Woody Hamilton Hurst, Isabella Stobie, Tabitha Marriot and students from Studio Forcada.

It was a wonderful evening that I was lucky enough to experience.