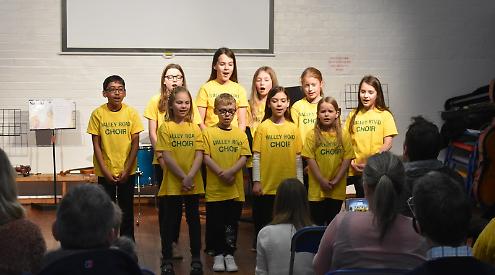 CHILDREN were given the chance to perform in front of an audience at the first event of this year’s Henley Youth Festival.

The nine-day festival began on Sunday with Music Makers, an event for primary school children.

There were also performances by the Henley Suzuki Violin Group and the Valley Road School Choir.

The children received feedback from musician and teacher Maureen Idowu.

The violin group, which is made up of Oscar Tarling, Ruby Urch, Elena Tarling and Saachi Rao, performed Minuet 2 by Johann Sebastian Bach.

Saachi, eight, then performed The Happy Farmer by Robert Schumann accompanied by event organiser Anna Del Nevo on the piano.

She said the piece was her cat Skippy’s favourite as it would jump in front of the camera when she played it during online music lessons.

The youngest performer was Melia Drummond, who is in year 3 at Valley Road School and played Almost Like a Dream by Nancy and Randall Faber on the piano.

Her performance was slightly delayed due to a search for a smaller stool to ensure she could reach the pedals.

Yi Jia Tse then sang When You Wish Upon A Star from Pinocchio with her mother accompanying her on the piano.

Elena Tarling, nine, performed Bourrée by Bach on the violin and was followed by Ayden Yasin, nine, from Valley Road School, who played Prelude in C by Bach.

The last soloist was Oscar Tarling, 10, who played Concerto Five in D Major by Friedrich Seitz.

The concert finished with everyone performing Ode to Joy by Ludwig van Beethoven.

Ms Del Nevo wrote lyrics to accompany the tune based on friendship, which is this year’s festival theme.

The first verse was performed by two violinists and Ms Idowu on the cello and in verse two, two more violinists joined in. The singers and choir joined in for verse three and everyone, including the audience, joined in the fourth verse.

Compère Alfie Hay then asked everyone to do verse four again with more participation from parents.

Ms Idowu told the children: “It’s really important to finish off nicely and give the audience a smile — you always tend to get more claps if you smile.

“I really enjoyed it and you’ve all obviously been working very hard. Keep up the good work; we must have music in life. There’s nothing better than singing and playing together or in front of an audience.”

Ms Del Nevo said: “All the children that played were fantastic. During covid most people found doing lessons online really difficult. Everyone gets bored with the computer and struggling to hear and you lose some children.

“But all the children that played today kept going. They’re all obviously really dedicated. I’m really impressed with them and just hope that next year we have more children signing up to take part.”