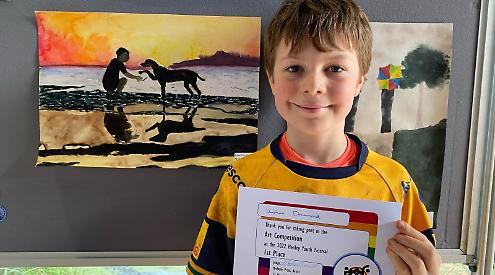 ON Sunday, March 13 the Henley Youth Festival concluded after nine days with a prize-giving ceremony for the art, film, mural and writing competitions.

The event was hosted by the River & Rowing Museum and was attended by the winners and their families, the judges and Mayor Sarah Miller.

The competitions were open to aspiring young artists who live or go to school in the Henley area and the theme of this year’s festival was “Friendship”.

The Mayor kicked off the event by welcoming everybody and then saying she was blown away by the quality and vibrancy of the art. She said that she couldn’t choose her favourite piece because they were all so fantastic.

Nicola Sutherland, the judge, commented: “The bold symbolism of this mural and the positive message it sends is what makes it stand out from the others.

“The design is the one that extends the hand of friendship out of Henley and around the world to towns and cities we are twinned with.”

She then presented the representatives of the school with a cheque for £250 to spend on art supplies, which caused the winners to give a gasp of surprise.

The best film animation winner was Friendship? by the Rupert House Animation Club, who the judges described as a “very talented and creative group of young women”.

The winner of the writing competition was Millie Le Beigge, who wrote A Letter To My Friend, which was about the friendship between a young girl who recently lost her sight and her guide dog. The judge said: “I challenge anyone to read it without crying.”

Millie, 13, who attends Gillotts School, said she was extremely happy to win the prize and that she hoped to become an author or something to do with animals in the future.

The art competition was very tricky for the judges because there were so many beautiful pieces and the room was overflowing with art.

Joshua Drummond, who is in year 5 at Valley Road Primary School, won first prize in the 9 to 11 age category with his painting, Man’s Best Friend. Michelle Frith, a local artist and judge, said: “This boy is nine years old and has an extraordinary talent.

“He has produced a piece of artwork very worthy of a final piece at GCSE level. Exquisitely painted, beautiful use of subject matter.”

Joshua’s advice to other young artists was start with a basic layer, then slowly add detail.

He would like the festival to have an underwater theme next year.

The 3D primary competition winner was Anya McGinn, from Trinity Primary School, with her Story Machine.

“It is not very often that an artwork moves me as much as this little eight-year-old girl’s piece did,” said the judge. “It was so innocent, so endearing, so moving, and such a clever and creative 3D process.”

All the winners went home with an Easter egg, trophy and certificate. The writing competition winners received a book donated by the Bell Bookshop.

Laura Matthews, who chairs the festival, said she was already looking forward to next year and would love to hear from anyone who would like to get involved. She is also open to ideas for next year’s theme.

This wonderful festival would not happen without volunteers and the more people there are, the bigger and better it can be.