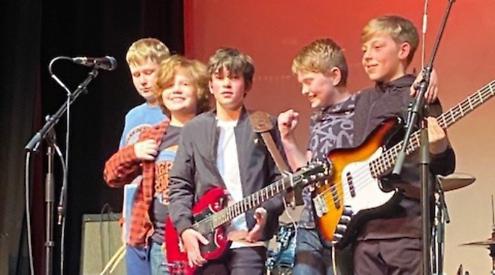 ON Thursday, March 10, young musicians from around the area came together to show off their talent.

Whether in bands or just solo singers, each act carried so much talent and expertise and the Kenton Theatre was filled with music and excitement.

To open the night, a group called Revival played Seven Nation Army by the White Stripes. Beginning with the catchy and well-known bass line, they had the audience’s attention from the very first note.

The band, who have only been rehearsing since January, followed this with two of their own songs, Sunshine and Don’t Keep Me Waiting. Both had memorable melodies and toe-tapping beats. The boys all attend Maiden Erlegh Chiltern Edge School in Sonning Common, where they rehearse, and are Fred Wickens, 12 (drums) and 11-year-olds Rufus Schofield (keyboards and vocals), Jack Wyatt (lead vocals and guitar), Charlie Griffin (bass) and Spencer Watkins (keyboards).

In contrast to Revival was
14-year-old Annie Skaanild, from Sir William Borlase’s Grammar School in Marlow, who played the piano and sang.

Annie, who has performed at the festival three times before, sang The One That Got Away by Katy Perry and Impossible by James Arthur. Her powerful voice complemented the slower and more soulful music.

Next up was Louise Jennings, 17, from Cranford House School, who sang Valerie by Amy Winehouse, accompanied by Felix Richardson, 14, and his
12-year-old sister Didi on guitar and drums respectively.

Louise’s rich voice floated over the top of a catchy beat and the enthusiasm throughout the theatre was infectious. Though the siblings had only met Louise for the first time on the day, you would think they’d been playing together for years.

Felix and Didi, from Gillotts School, then played Hardest
Button To Button by the White Stripes and, as Felix switched to singing as well, Lonely Boy by the Black Keys. Their energy made the whole performance fun and exciting.

This was the fourth year running they have performed at the festival — Didi first appeared when she was in year 4.

The pair have now been playing together for about five years and mentioned that they hope to continue performing and making music.

Joe Ryder, 16, who is studying for a BTEC in music at The Henley College, followed with three of his own pieces. He started with a song using looped tracks. The catchy melody and chorus with the layered accompaniment made for a highly impressive first piece.

The next two numbers were no different, especially considering Joe had not played the first of these live before.

His lyrics were original, though followed a familiar theme of relationships. “You’d think I’d been married 50 years,” he joked. Joe has been playing for about five years and hopes to go on to study songwriting and performance at either Brighton or Liverpool University.

To close the night was Blankfield, a group made up of five 17-year-olds also from Borlase — Alex Coe (vocals and guitar), Joe Thompson (guitar), Lewis Gabb (lead vocals), Khyan Speding (drums) and Huw Williams (bass). Their performance was engaging and they had the whole audience clapping along.

There were some impressive solos throughout their set, most notably a spectacular drum solo to transition between Kilby Girl by the Backseat Lovers and Undercover Martyn by Two Door Cinema Club. Blankfield wrapped up the night with an original piece, which made for an exciting finale and ended the evening on a real high.

Gig Night was a brilliant demonstration of talent and made for a highly enjoyable experience. Next time, you’ll just have to go along and see for yourself.