Medals for all as pupils race in mud 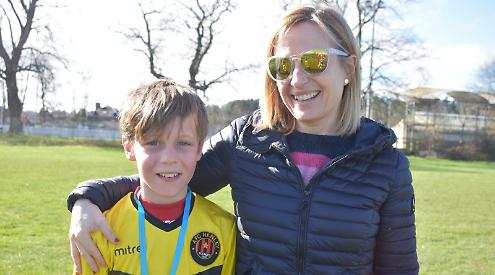 ON the morning of Saturday, March 12, an enjoyable fun run was held at Swiss Farm in Henley.

It was a cold, showery but sunny day and the ground was damp and muddy from the overnight downpour.

Children were waiting nervously at the start line, saving their energy for the tough, steep hills to come in the race.

More than 200 children from reception to year 6 at 14 local schools participated with the first race starting at 9am and the last one at 10.30am. The races varied in distance from 0.5km for the reception children to 1.6km for the year 5 and 6 race.

The winner of the year 5 and 6 girls’ race was Zara Tate, from Badgemore Primary School.

Zara said that before the run she was excited and nervous but as she neared the end she felt exhausted, especially having had to run up a steep hill. She added that running was fun but hard work.

Everybody who participated received a medal and the race winners were also given a trophy.

Valley Road Primary School was presented with a £250 voucher to spend on sports equipment for having the most children competing.

The fun run was sponsored by Physiolistic and owner Clint Botha said everyone had a wonderful time, including the parents.