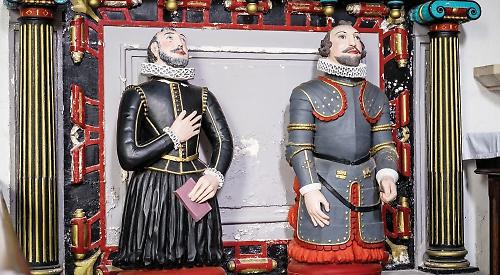 IF you are visiting Hurley, the elaborate and colourful Lovelace memorial in the parish church is a must-see.

The village is steeped in history and has featured in many TV programmes. This is largely because of the Lovelace family, who became Lords of the Manor in 1545 when Hurley’s monastic estate passed into their hands following the Dissolution of the Monasteries. The family built a mansion called Ladye Place on the site of the priory ruins.

The first Sir Richard Lovelace went on an expedition with Sir Francis Drake but the most significant member of the family was John, who played a major role in the Glorious Revolution of 1688. An ardent anti-Catholic who had been jailed for his part in the plot to assassinate Charles II, he supported the cause for the Protestant William of Orange to take over the throne from the Catholic James II.

The crypt at Ladye Place became a centre of plotting and it’s said that fellow conspirators would reach it by way of underground tunnels from the river to avoid detection. It still stands in private grounds on the old monastic estate.

l In my item about Anne Damer last week, I incorrectly stated that the Isis carving on Henley Bridge looks downsteam and Thamesis looks upstream when in fact it’s the other way round. My apologies.