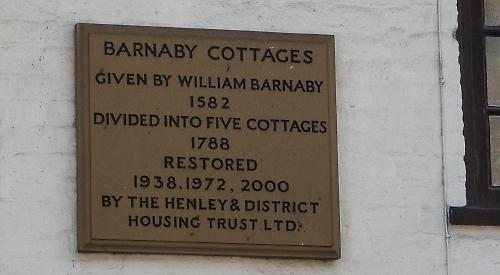 IF you search the internet for “Barnaby” in relation to Henley you are rewarded with a host of information about where various episodes of Midsomer Murders were filmed.

However, researching in the traditional way with reference books, yields information about yeoman William Barnaby, who in 1501 paid £13 6s 8d for a stone arch to be added to Henley Bridge.

A generous man, he also paid for hundreds of loaves of bread for the poorest townsfolk and gave money for smocks for the 10 oldest and poorest women.

Barnaby also made quarterly payments to the residents of the almshouses and rewarded churchwardens with gifts.

Although his arch has long been buried in the silt at the bottom of the Thames, my picture shows the cottages in New Street, which were another gift from him in 1582.

The cottages look well cared for, which is probably why they have stood the test of time.