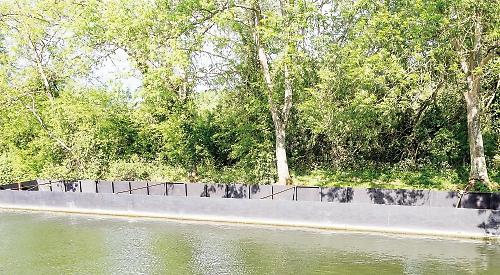 IT is difficult to convey scale with a photograph of this floating curiosity.

It is huge, probably about 23m long, and can be found moored alongside the public footpath at Lashbrook, between Wargrave and Henley.

This takes in the outstanding riverside walk previously featured in Hidden Henley and leads to a dead end in some woods beside the Hennerton Backwater where there is a fine view downstream towards Marsh Lock.

At this point the Lashbrook ferry used to operate to take travellers to the Henley side of the river and evidently to transport cattle in the other direction across the Thames, where they would be driven over the bridge on the backwater and then beyond via Wargrave Road.

However, this floating rectangular steel construction is puzzling. It has been here at least a few weeks, has no visible Environment Agency licence and does not appear to be designed for transporting goods.

This only leaves the passing walker to conclude that it will end up as a house boat. Perhaps a well-informed reader will let me know.