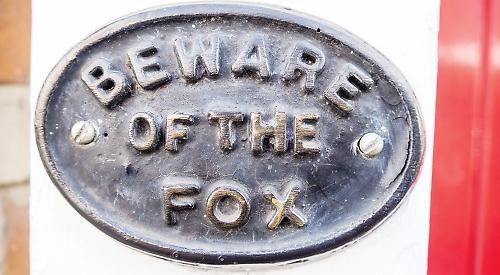 NEW SCIENTIST magazine recently ran an article suggesting that there may be five times more foxes living in towns than previously estimated.

The animals have certainly become increasingly urbanised since the Forties with some people encouraging this by deliberately leaving scraps of food out for them.

Urban foxes also scavenge the streets and around litter bins for food from carelessly discarded takeaways.

That might explain this sign (above) in Hart Street, Henley, although I suspect it’s more likely a tongue-in-cheek joke, perhaps at the householder’s expense even!