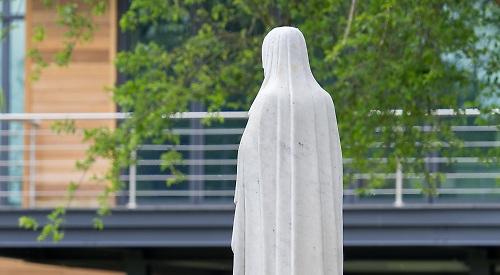 IF you are out walking near where the River Loddon enters the River Thames you may have noticed some changes on land.

Between the Henley to Twyford railway line and the tributary was once a series of shanty buildings.

These are said to have accompanied houseboats but over the years most of them have been turned into grand houses and the houseboats have gone.

More recently one corner plot has been transformed into a fine riverside home built to avoid flooding. In the garden is this statue, purposely positioned at the end of a path from the house and close to the water.

From a distance it appears to be a lifesize sculpture of Mary of Nazareth, mother of Jesus, indicating that the owner is a practising Christian.