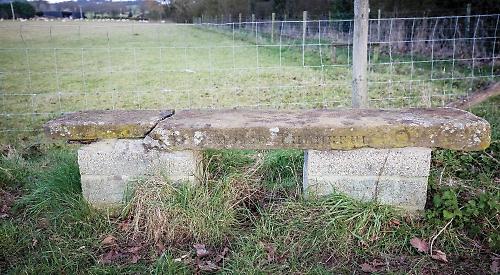 WITH Chilterns walks becoming ever more popular for health and recreation, many readers will know the footpaths of nearby Ipsden and Hailey.

The medieval church of St Mary's in Ipsden is around a quarter of a mile from the village itself and one bridleway that leads there takes an elevated route with outstanding views, passing a war memorial curiously positioned on its own in a field.

Looking towards the church there is the ornamental well, featured in this column 15 years ago, that was given to the villagers in 1865 by Rajah Singh, following the example of the Maharajah of Benares and his gift of a well to the people of Stoke Row, just a few miles away.

The meadow through which this bridleway runs may have been the site of an even earlier church from which stone was used to repair the current building back in the 12th century. Just before you reach the church and well is this old stone slab on which the walker can catch breath. The inscription on the side is just visible as “REST AND BE THANKFUL” and is clearly much older than the concrete units on which it's mounted.

It is another Hidden Henley subject that will not be around in the years ahead because it is already split one third of the way along and the weather seems likely to finish it off before long.