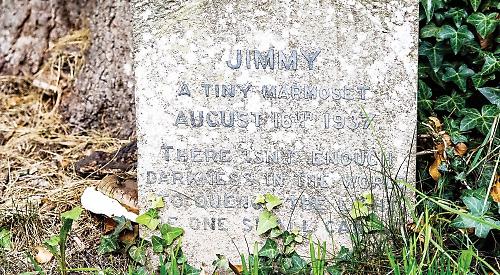 DAX AIKEN wrote in to ask about this unusual memorial stone, which he spotted while on a family walk along Fair Mile, Henley.

The stone, which is right beside the pavement, reads: “Jimmy. A tiny marmoset. August 16th 1937. There isn’t enough darkness in the world to quench the light of one small candle.”

After I featured it here previously, a reader suggested that the maple tree behind the grave may have been planted at the same time, although it would have had to have grown quickly for this to be true.

The marmoset is said to have belonged to a Miss Jekyl, an eccentric former nursing sister from the First World War, and was wrapped around her neck in the manner of an old-fashioned fox fur. This woman usually dressed in long black clothes and either lived in or frequented New Street.

More recently, a red rose or a bouquet of flowers have been placed by the headstone occasionally.